You know, maybe it’s a delusion, but an awful lot of corporate reports for the companies I follow are starting to sound the same. I need to read something else. Most of them say some variation of we’re trying to figure out how to integrate brick and mortar with online, sales growth is hard to come by, we’re rationalizing expenses and improving efficiencies, we’re reducing SKUs, we’re improving systems to get the right inventory to the right place at the right time, we have some constraints caused by our balance sheet, the U.S. market is especially tough, we’re pinning our hopes on Asia/Pacific, we’re trying to improve product, we’re focused on building our brands and managing our distribution, and the market is very promotional.

I think that covers it, and now I have to somehow relate that introduction back to Quiksilver. I guess I can do that by saying they are dealing with most of these issues.

SG&A expenses were down just 1% from $215 to $213 million, but as a percentage of sales they were up mightily, from 44% to 53.8%. They reduced athlete and event spending by $5 million, but had a gain on the sale of a building of $5 million. Employee compensation fell $4 million because they didn’t have the severance costs they had last year. They spent an additional $5 million on marketing other than athletes and events, had $3 million more in bad debt expense and $2 million in higher depreciation.

Operating profit went from a positive $23 million to a loss of $206 million. However, that includes noncash goodwill impairment related to European assets of $182 million. Remember, however, that even though it’s noncash, it’s indicative of lower expected future cash flows from the assets being written down.

Here’s the chart from the 10-Q that lays it all out for you by segment. You can see the 10-Q here if you want, though I doubt anybody ever goes to look. The Americas segment is just what you’d think it is and most of its revenue comes from the U.S., Canada, Brazil and Mexica. EMEA is Europe, the Middle East and Africa, but mostly the revenue is from Great Britain, continental Europe, Russia and South Africa. APAC (Asia and the Pacific Rim) is mostly Australia, Japan, New Zealand, South Korea Taiwan and Indonesia. Notice how China does not make the top six yet. 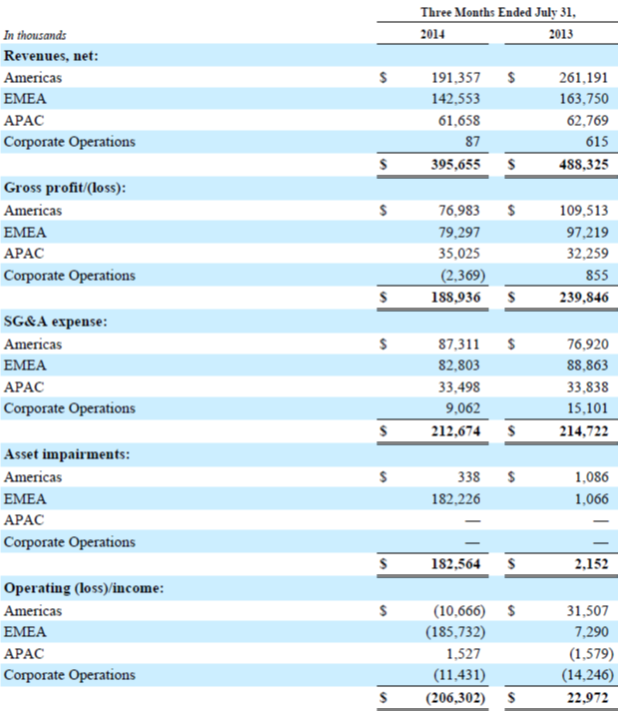 Quiksilver, by the way, ended the quarter with 658 company owned stores. They are on pace to open a net of 60 new stores by the end of this fiscal year.

Please note that APAC’s operating income rose $3 million on a small decline in sales. Ain’t nothing like raising that gross margin.

In the Americas, “This net revenue decrease was primarily due to lower net revenues from our DC brand in the wholesale channel of $47 million driven by reduced clearance sales, narrowed product distribution to mid-tier wholesale customers, and the licensing of DC children’s apparel. In addition, net revenues decreased in the Quiksilver and Roxy brands by $14 million and $7 million, respectively, in the wholesale channel due to licensing of Quiksilver children’s apparel, lower customer demand, and less effective order fulfillment compared to the prior year. Americas segment net revenues decreased 28% in the developed markets of North America, but increased 9% on a combined basis in the emerging markets of Brazil and Mexico.”

The licensed kids business was responsible for $11 million, or 16% of the decline in the North America wholesale business.

I want you to specifically note that they are pulling back DC’s distribution with the goal of strengthening the brand. It’s about time. In this case at least, they are giving up some sales in a good cause.

There isn’t much good news about revenues in AMEA. The decline is “…due to lower revenues in the wholesale channel across all three brands driven by lower customer demand as a result of poor prior season’s sell through, and less effective order fulfillment compared to the prior year. These decreases were partially offset by double-digit percentage growth in the e-commerce channel … ”

Lower demand, poor sell through, and troubles with order fulfillment is quite a triple whammy.

In APAC, wholesale revenues were down but that was offset by growth in retail and e-commerce.

Here’s revenue for the quarter by brand.

The Roxy decline “…was primarily due to lower net revenues in the Americas and EMEA wholesale channels of approximately $7 million each, partially offset by increased revenues in the e-commerce and retail channels.” Roxy was not licensed for children’s apparel.

So it seems we can conclude that wholesale in the Americas and EMEA kind of sucks. You can see the problem in this chart showing sales by channel.

Quiksilver notes that they are updating their profit improvement plan “…based upon recent difficulties within the wholesale channels of our Americas and EMEA segments. As part of updating our PIP, we will establish additional SG&A reduction objectives and allocate capital to our emerging markets, e-commerce and retail channel growth plans.” So more expense cuts to come.

In a short section on page 29 of the 10-Q called “Known or Anticipated Trends,” Quik gives us a look at what the future looks like. Over the next few quarters they expect net revenue comparisons will be “unfavorable.” That means they will be lower when compared against the previous year’s quarter. For the year they expect them to be “unfavorable” in North America and Europe wholesale but favorable in emerging markets and e-commerce. Didn’t say anything about retail.

“Unfavorable” is such a benign sounding word for such an unfortunate result, speaking of benign words.

They also tell us that the adjusted EBITDA for the year that ends October 31 will be lower than for the previous year. I tend to believe that if the adjusted figure is worse, the as reported will be even worse. Maybe I should have said “unfavorable.”

There’s a lot going on. Some of the things I think Quik is doing right have caused what I hope are short term difficulties. Reducing DC’s distribution is absolutely critical to the brand’s success, but in the short term costs revenue. They’ve stopped or at least reduced discounting on their web sites. Again, a possible short term revenue hit, but good for the brands. Just as a guess, I expect core shops to like that.

In the conference call, CEO Andy Mooney announced, as part of their positive accomplishments, that “…we moved a large number of small independent accounts to a B@B service model.” I understand the financial rationale for doing that, but I have reason to believe you shouldn’t expect those accounts to see it as positive.

And literally as I write this, I got an email telling me that Quik is reorganizing its marketing function to help give it a better connection to the core.

They also decided not to order any products in quantities below production minimums because of the additional cost. That eliminated some orders, but helps gross margin. Some late deliveries were the result of changing from regional to global demand planning, but it’s a good thing to do anyway.

There was also some discussion about the previously announced program to selectively reduce prices. They don’t expect it to reduce margins given the other efforts they’ve taken to reduce SKUs and rationalize production.

Quik is making changes in every facet of their operations. That some of them didn’t quite go according to schedule isn’t a surprise. I just heard from a client that they’ve got a container held up in customs because of an “invasive moth.” God, you just can’t make this stuff up and to some extent it happens to every company every year.

But Quiksilver doesn’t have the luxury of time. Its brand building (rebuilding?) has to be successful sooner rather than later. Its balance sheet can’t continue to deteriorate, but it sounds like we can expect further losses in the next few quarters. For all the things I think they are doing right, there’s a time limit here that’s gotten shorter as a result of a couple of tough quarters.

[contact-form-7 404 "Not Found"]
The Issue Continues to be Competitive Positioning: PacSun’s QuarterThe Future of Malls and Impact on Industry Retailers
Scroll to top