The thing is, I really like Skullcandy’s marketing.  There is some commonality of message and attitude among their sponsored people (notice I don’t just say team riders) even when those people come from very different places and perspectives.

I like it is because while they have, for example, sponsored surfers the message isn’t just about surfing. It’s about life and living it- the experience, if you will. With that approach, they can be aspirational to a broader group of potential customers. You may never ride a 30 foot wave, but there’s no reason you can’t be positive, innovative and willing to take a risk as you live your life.

The issue isn’t getting a lot these ambassadors, to use Skull’s word. It’s getting the right ones. Those would be the ones who are not only in sync with Skull’s corporate culture and market position, but who can, maybe, be attractive to an additional customer segment , allowing revenue to grow, without Skull losing credibility and causing customer confusion as it gets further from its “core.”

They have to walk a fine line there. As I’m sure you recognize, I’ve written about this dilemma when discussing other public companies as well.

We’ll get back to this critical and way more interesting strategic stuff but first, sorry, we’ve got to do the numbers. 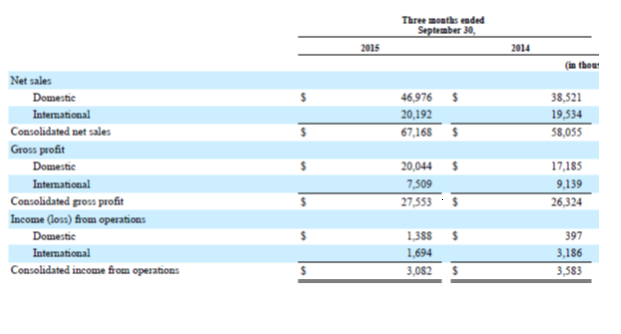 There are two things I’d like to know about that they don’t discuss. The rollout to Walmart is conspicuously absent after they’ve discussed it in some detail in previous quarters. The analysts have always asked about Walmart in the past. I’m intrigued by the fact that it didn’t come up or that management didn’t mention it. What do they all know that I don’t know?

And remember that they have the off price brand 2XL which doesn’t even get a mention except that they acknowledge its existence in the 10Q. I’d like to know how much of that they are selling and whether it’s going up or down.

“Total gross margin decreased across both segments primarily due to product mix shift to lower margin wireless products, the continued increase of gaming products sales, significant declines in foreign currencies in our International segment, and increased sales of aged inventory at our International segment. Gaming products typically have lower margins which are partially driven by higher third party licensing and royalty costs.”

The part about increased sales of aged inventory isn’t a good thing, but they describe that as the result of some distribution changes in Europe. That still doesn’t make it a good thing, but hopefully it makes it a one-time kind of thing in pursuit of a better long term result.

SG&A expenses rose from $22.7 to $24.5 million, but as a percentage of revenue were down from 39.2% to 36.4%. President and CEO Hoby Darling’s introductory comments during the conference call were a tour de force of all the various marketing things they are doing and how particular products and product classes are performing well. Once again, I’ll say that I like the marketing stuff they are doing.

I’m particularly intrigued by their decision to look to grow with existing retailers rather than opening many new ones, at least in the U.S. They are relying on better merchandising and getting more space to grow their business with existing accounts.

As you may recall, CEO Darling began his stewardship of Skull by cutting back distribution to build the brand and avoid competing with very low priced product with the Skullcandy brand. I thought and still think that was a great decision. Bluntly, they didn’t have a choice.

I wondered a while ago if perhaps in the days of the internet and Amazon, distribution didn’t matter if you merchandised well (on line as well as in brick and mortar). But then, speaking in general terms, I decided it did matter. Where and how customers see your product presented continues to matter.  I still see the Skullcandy brand in places I wonder if it should be, and it doesn’t always seem well merchandised in those places (Fred Meyer is the one I’ve seen most recently).

In the specific case of Skullcandy, perhaps they don’t have a choice but to focus on merchandising and making it look like a virtue (which it can be). I mean, where are they not selling where they can start selling and sell enough to move the needle as a public company without damaging the brand? It will only get harder as they grow.

Operating income was down from $3.58 to $3.08 million. Net income fell slightly from $2.15 to $2.13 million. They reduced their guidance for this quarter and, as a result, for the year overall.

The balance sheet went through an interesting gyration, with cash falling from $40 to $14 million. However, current liabilities also fell $22 million, as Skull used some of its cash to take early payment discounts from suppliers. This will benefit their gross margin, but we learn in the conference call that it hadn’t started to have an impact in the September 30 quarter.

There continues to be no long term debt. The current ratio has improved from 2.94 to 4.40. Cash used in operating activities was a negative $14.3 million compared to a positive $5.3 million in LYQ.

I want to acknowledge that the strength of the U.S. dollars had a significant impact on revenues and margins. But I’m not going to spend time on it. As regular readers know, my point of view is that dollar investor should care about dollar results, whatever the cause of improvement or decline. There’s nothing special about exchange rates. They are just another factor in doing business that impact results. And I’ve never heard a company report, “We did way better than we should have because of currency.”

At the end, we find ourselves in the same place we seem to be finding ourselves with other companies -especially public companies- in this space. Skullcandy is a great brand that I think can hold its market position in the “cool” niche it has carved out. But its ability to grow outside that niche against competition that can outspend it in marketing and product development in the always highly competitive consumer electronics market is unknown.

Maybe their marketing will help them be more than a consumer electronics company.

[contact-form-7 404 "Not Found"]
This Should Get Your Attention: Amazon Opens Its First Brick and Mortar Sto...Billabong Holds Its Annual Meeting; Progress and Headwinds
Scroll to top