As usual, we’ll focus mostly on what’s going on with Sanuk. Here’s the link to the 10-K if you want to peruse it yourself.

The table below provides details on their revenue by brand and channel. You’ll note that the UGG brand accounts for 82% of Deckers’ total revenue. Sanuk generates 6.3% of the total. Its revenue grew from $101.7 to $114.7 million (12.8%) from one year to the next. 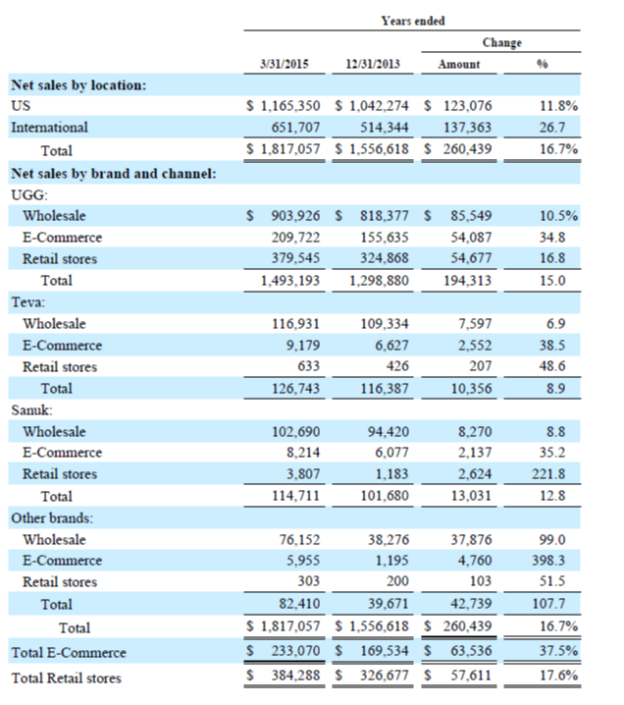 increase in the average selling price in our other brands wholesale segment.”

That’s an overall decline of only 0.73%. But given that UGG represents 82% of total revenue and that the average wholesale selling price of UGG apparently increased, it implies some pretty dramatic reductions in Teva, Sanuk, or both.

Here’s what they tell us about Sanuk’s results.

And here’s how they describe Sanuk’s distribution.

“We sell our Sanuk footwear primarily through independent action sports retailers, outdoor retailers, specialty footwear retailers and larger national retail chains including Nordstrom, Dillard’s, Journeys, DSW, Urban Outfitters and Tilly’s. We believe all these retailers showcase the brand’s creativity, fun, and comfort and allow us to effectively reach our target consumers for the brand.”

That doesn’t look like a bad list of accounts, but of course it’s not complete. We see increased sales offset by a lower selling point. One possible interpretation is that Sanuk is finding its way into some lower priced distribution as it looks for growth. Deckers would hardly be the only company managing brands for growth that has to make some tough distribution decisions. But what we’ve seen with various brands is how hard it is to keep brands tied to a “core” market credible as they expand distribution. The new customers may know the brand, but not the story that gives the brand its competitive advantage.

Speaking of that, here’s how Deckers describes how it competes.

“We believe that our footwear lines and other product lines compete primarily on the basis of brand recognition and authenticity, product quality and design, functionality, performance, comfort, fashion appeal, and price. Our ability to successfully compete depends on our ability to:”

So, that’s all correct. All those things are good things to do. But they are the same thing everybody else is trying to do. None of them offer the potential to provide a sustainable competitive advantage unless Deckers can do them, and continue to do them, better than all the other companies trying to do the same things with their brands.

That’s not a criticism of Deckers. It just seems to be the reality of our market.

Deckers overall gross profit margin was up from 47.3% to 48.3%. Of the 1% increase, 0.7% came from doing higher margin retail and ecommerce business and 0.2% from acquiring their UGG distributor in Germans. Which I guess is a way of saying that none of it came from making product less expensively or raising prices.

I’d love to know specifically what “shift in sales mix” means. But we’ve got higher closeouts causing a big reduction in the gross margin. I wonder if that was what drove the expense reduction.

2015 is the last year that Deckers has to pay the former owners of Sanuk their earn out. It’s 40%, without limit, of the brand’s gross profit for calendar 2015. Right now, Deckers is estimating that amount at $24 million.

Deckers had a pretty good year given the general economy and competitive circumstances. With regards to Sanuk, they paid a lot of money for it, and so far haven’t seen the return.

Chairman, President and CEO of Deckers Angel Martinez described the Sanuk strategy this way in the conference call:

“Our strategy is to evolve the Sanuk brand from primarily a man’s surf brand into a global lifestyle brand continues to unfold. This has been fueled by a heightened focus on women through innovative new products such as the brand’s Yoga series of sandal and shoes which has opened up distribution with leading department stores and specialty retailers.”

What many companies and brands seem to be running into all over the industry is that taking a surf (or skate, or snow, or whatever) brand that’s closely identified with one activity and making it a “global lifestyle brand” is way harder than it sounds. In fact, I have general concerns that it may only rarely be possible (in a reasonable time frame) because the required growth craters the brand’s competitive positioning.

I’m beginning to think it makes a lot more sense to create a new brand rather than pay a high price for an existing one if you’re going to lose or fire all the people who made the brand you acquired successful in the first place.  Too bad Deckers did that with Sanuk.

[contact-form-7 404 "Not Found"]
Quiksilver Director Resigns- and She Doesn’t Sound Happy.PacSun’s Quarterly Results: More of the Same
Scroll to top