It started in May of 1984 when Continental Illinois Bank failed.  And was rescued.  People were saved from having made a bad investment.  So much for moral hazard- the idea that investing is a risk, which has evolved to be not the case in “too big to fail” companies.

We know what happened.  More and more bailouts and support of companies that should have gone belly up, with the investors losing money and remaining assets and capital being reallocated to productive uses.  The Federal Reserve, then, could apparently reduce the severity of or prevent recessions.  Wonderful!  What could go wrong?

Meanwhile, the United States with the dollar as the world’s trusted reserve currency ran current account deficits to fund everybody’s need for dollars.  We bought all the stuff we wanted, and the sellers recycled their dollars back into Treasury securities, making our deficits and unfunded liabilities (Social Security, Medicare, etc.) problem short term meaningless and keeping inflation low.

Until it wasn’t meaningless anymore.  The economist John Maynard Keynes did say that it was a good idea to deficit spend to counterbalance a weak economy.  In the same book (his General Theory- go read it) he also said that when times were good, the government should repay that debt.  Well, that’s inconvenient.  And our elected representatives were having such a good time giving people stuff we really couldn’t afford without higher taxes.  And we were willing to take it.

You can kick the can down the road for a while.  Until you can’t.  It always, always, always, ends this way when a country abuses its currency.   The government’s financial model becomes unsustainable.  Eventually there’s some kind of crisis.  Go read This Time is Different: Eight Centuries of Financial Folly.  One thing you should learn is that you don’t solve a debt crisis with more debt.

Largely of their own making, the Federal Reserve is now staring this crisis right in the eye- trying to ride two horses with one ass.

The first horse is the need to reduce inflation which, wonder of wonders, in the midst of massive money supply increases, continuing supply chain problems and now a war, didn’t turn out to be transitory.  If you have the impression that the inflation you are experiencing is worse than what’s being reported, you’re probably right.  It has to do with how inflation is officially calculated.  That needs to be another article.

Raising rates dampens demand thereby, in theory, reducing inflation and perhaps causing a recession.  Some of this inflation is caused by supply chain problems and the Fed has no tools to reduce that inflation.  Remember as well that real interest rates are negative.  That is, they are below the rate of inflation, favoring debt holders because you get to repay with dollars that are worth less.  It’s going to take a pretty whopping increase in interest rates to impact this inflation.

The other horse the Fed is trying to ride with its single, solitary ass is the need to keep the government solvent- at least on paper.  For that, it needs inflation.  That requires some explaining.

The last time the government resorting to financial repression (keeping interest rates artificially low- that is, not market determined) was after World War II.  During the war, the country ran up a lot of debt (Duh).  By keeping rates low and allowing inflation to run, they reduced debt to GDP (gross domestic product) to a manageable level.  They never actually had to pay the debt back.

Look at it this way.  You borrow $100 dollars.  Inflation makes the price of things go up.  You still owe $100, but you are getting in a lot more dollars because of inflation (even though each buy less) and can pay that $100 back with depreciated dollars.

I think this is the reason the Federal Reserve worked so hard to call inflation “transitory” for as long as it possibly could.  They need to reduce debt to GDP from around 130% down to 80% or so (which has not happened) before they could normalize interest rates without blowing things up.  Blowing things up how, you may ask.

Currently, tax revenue doesn’t even cover interest on the national debt and payments for the entitlement programs required by law, not to mention the rest of the budget.  I don’t know the number, but a lot of tax revenue comes from stock market profits.  What happens to tax collections when the increase in interest rates causes bond and stock prices to fall and there are fewer profits to be taxed?

The numbers I have say that Federal Government interest expense for the year ended last October 31st was $562 billion. Here’s the page that number comes from. The average interest rate for January 2022 was 1.556%.  Here’s where I got that number.

Just for fun, let’s say that average interest rate doubles, taking interest expense to $1.124 trillion.  But it could go way higher than 3.11%, couldn’t it?  It has in the past.  Some of you reading this remember when it did.  I remember getting 6% in a money market fund and once had a mortgage at north of 10%.  Interest on 30 year Treasury debt topped out at around 15% in September of 1980.  Here’s the chart showing what happened after that. 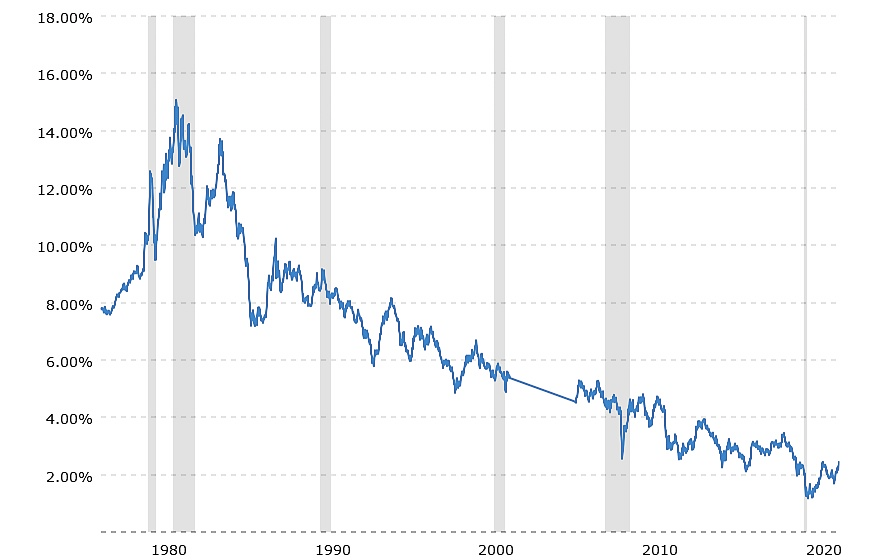 Who thinks that interest rate is going to keep going down?  Here’s the source for that chart.

If interest rates rise, how would we pay?  Through austerity involving cutting all kinds of entitlement programs?  Sure, that’s the kind of things politicians love to foist on their constituents.  Or would the Fed just print the money, probably destroying the U.S. dollar (and maybe the dollar’s role as the world’s reserve currency?) and giving us some inflation you could really sink your teeth into.

In half an hour from when I’m writing this, the Federal Reserve will probably announce that it is raising short term interest rates by one quarter of one percent.  They should raise it by more.  They, along with our elected representatives, should recognize that recessions are a normal, and even constructive though not pleasant, part of the economic cycle.

But I’d be surprised if they will.  By now, you should understand what I mean by the Fed trying to ride two horses with one ass.  The government needs high inflation to get out from under its debt problems, but high inflation is destructive and produces a lot of pissed off and maybe in some cases desperate voters.

Lenin is supposed to have said, more or less, “Sometimes nothing happens for decades, but sometimes decades happen in weeks.  I’m pretty sure he would have thought that applied to the Russian invasion of the Ukraine.

I have a lot of faith in the inherent strengths of the United States.  Not so much, right now, in our government.  It’s a complicated story, but the government has lost the ability to respond to the people’s needs.  It’s happened before, and we fixed it.  May I suggest The Politics Industry if you’re curious when/how it happened and how it got fixed.

Meanwhile, it should now be obvious that how you run your business is changing.  We’ve got the trifecta of a pandemic, an evolving and inevitable financial crisis, and a war that’s reorienting the way much of the world thinks and operates.  A plethora of opportunities as well as risks.  Maybe this article will help you think about them.

And we will get through it.