“…in light of the recent and continuing changes in the retail environment, we also believe it is prudent to further reduce our global brick and mortar footprint. We expect to continue to reduce our footprint through a combination of store closures and the conversion of owned stores to partner retail stores, and, accordingly, we anticipate generating future cost savings. We are currently targeting a worldwide retail store count of approximately 125 owned stores by the end of fiscal year 2020.”

At June 30, Deckers had 96 concept stores and 63 outlet stores for a total of 159.  These are “predominantly” UGG stores.  Getting down to 125 stores will be a reduction of 21.4%.  Some of the decline will be due to converting owned to partner stores.  Partner stores “…are branded stores that are wholly-owned and operated by third parties. Upon conversion or opening of new partner retail stores, each of these stores become wholly-owned and operated by third parties.”

One can’t help but ask why, if Deckers doesn’t want to own these stores because of “changes in the retail environment,” the potential partners will.  Perhaps that suggests these will mostly be store closures.

Meanwhile, the 10-Q goes on to tell us, “As a result of our evolving Omni-Channel strategy, we believe that our retail stores and websites are largely intertwined and dependent on one another. We believe that in many cases consumers interact with both our brick and mortar stores and our websites, before making purchase decisions.”

If stores and websites are “largely intertwined and dependent on one another,” then what will be the impact of store closings on online business?  Why do they believe it will be positive, or at least not negative?

This of course is the question we’re all struggling with.  What’s the right number of stores in the right place with the right configuration given the online world we live in?  Amazon got to start with no brick and mortar and detailed customer data from years of online transactions.  The rest of us don’t.

40% of Deckers’ stores are outlets.  I know we’re way past the point where outlets are just places to get rid of lousy inventory.  But I believe customers’ perceptions of outlet versus concept stores is different and I wonder how that impacts the acknowledged interdependence between stores and online.

You know I believe that the current environment offers an advantage to the largest players.  I also know you can have just a store or two and be successful as a mostly internet player.  I wonder if Deckers, with continuing shrinking of their brick and mortar retail space, isn’t going to find itself caught in the middle.

I’ll get back to that after I review the numbers.

The balance sheet remains strong.  Total equity fell only about $4 million to $914 million in spite of the net loss.  Net cash used in operations was down from $43 million in last year’s quarter to $7.3 million in this year’s.  I was happy to see a 5.8% decline in inventory even with the growth in revenues.  CEO Dave Powers says in the conference call, “So for every brand, they’ve been focused on reducing SKU count, reducing the amount of closeouts in inventory in the marketplace. We’re starting to see the benefit of that, particularly in the smaller brands.”

Given the dependence of the smaller brands on the wholesale channel, that’s absolutely appropriate.  Actually, it’s probably the only thing that makes sense for those brands.  Cautious management of inventory, distribution and branding to improve the bottom line even at the expense of the top is what’s called for- not just for Deckers’ brands.

Below is the table showing revenue by brand and channel for the two quarters. 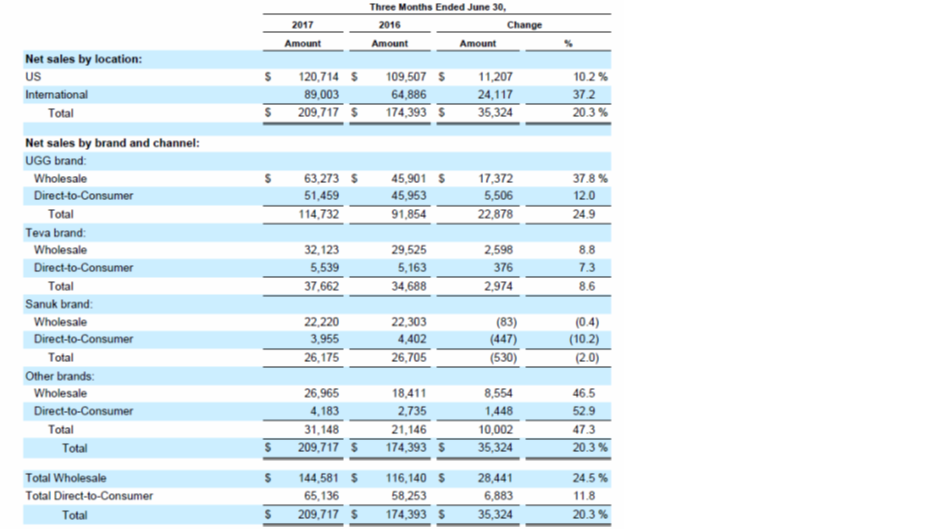 The first thing you notice is the dominance of the UGG brand, providing 55% of the quarter’s revenue.  Although perhaps your eyes might turn to the Sanuk numbers, since that’s why we started paying attention to Deckers in the first place.  The way things have gone for Sanuk since the purchase by Deckers, I suppose this 2% decline in revenue for the quarter looks like a victory.  Sanuk’s operating profit from its wholesale business was $4.42 million, up from $4.18 million in last year’s quarter.

Notice the relative balance between wholesale and direct to consumer for UGG, but not for the other brands.  That’s as expected since we know that most of Deckers’ retail stores are UGG stores.  Dave Powers tells us that, “Of the e-commerce business, it’s mostly in the UGG business.”

I think last quarter I suggested that Deckers might sell one or more of its smaller brands.  Now I’m not so sure.  If they can actually cherish and nurture their smaller brands through thoughtful distribution and branding, it might be worthwhile to keep them.  But as you know, that kind of focus on the bottom line rather than the top can be hard for a public company to pull off.

Sanuk reported an operating profit of $4.4 million on its wholesale business.  For Teva, it was $4.9 million.  UGG, on the other hand, lost $1 million on its wholesale business (an improvement from a $10.2 million loss in last year’s quarter) and there was an operating loss of $12.1 million on Deckers’ direct to consumer business (the loss was $19.4 million last year).  We know that’s mostly UGG.

Deckers’ overall performance improved during the quarter, but there’s still a long way to go.  Meanwhile, it’s smaller brands are making more money than its flagship UGG brand (at least in the wholesale area) on much lower sales volumes.

Its smaller brands require a different strategy than the UGG brand.  Owned brick and mortar is not important for the small brands but generates almost half of UGG revenue.  Management tells us brick and mortar is important and closely intertwined with ecommerce success even as they move to cut their retail space.

We will watch to see how this works out.

[contact-form-7 404 "Not Found"]
Advantage Big Guys with Solid Processes and Cash Flow: VF’s QuarterWhy is Back to School Shopping Slow?
Scroll to top