Billabong Chairman Ian Pollard and CEO Neil Fiske both spoke at the Billabong shareholder meeting on November 21. Billabong, like Skullcandy, is an acknowledged turnaround in process. Both are using the fact that the public markets designate them as such to approach their turnarounds in what I consider to be the right way.

I would particularly highlight three components of that approach. The first is that they have balance sheets which, if not as strong as they might like (who’s ever is?) are strong enough that they support the turnaround and are no longer an everyday distraction. If you don’t have that balance sheet strength, it’s the most important thing in the world. When you have it, you have the luxury of not having to worry about it all the time. I won’t say you take it for granted.

Second, they say they are brand focused in everything they do. Building “…strong global brands” is how CEO Fiske put it. Good, because at some level a differentiable brand is all you can hope to have.

Third, they both acknowledge that this is going to take some time and that they aren’t going to take short term actions that damage their long term plans. As Chairman Pollard put it, “…do not expect to see us radically change direction in the interests of short-term performance.”

Over a year ago, while Billabong was in the midst of trying to make a deal and get its financial structure in order, I saw RVCA product, on two occasions, in a place where you would not want to see it. It’s gone now, hasn’t been there in months and months, and I am sure I won’t see it again.   But had I been running Billabong at that time and needed the cash flow, I would have made the same decision. And that sort of closes the circle with component number one- the requirement of balance sheet strength that enables you to pursue your brand strategy- and lets us move on from there.

Why does this take so long? Consider how Neil describes the process.

“First we laid out our detailed strategy.”

“Then we re-aligned the organization to that strategy.”

“We then assessed our gaps in talent and capability and brought in new leadership and skill sets across the organization.”

First you have to decide what to do, then you organize to do it, then you find the right people to execute it. There is a certain logic to the approach.  I imagine it wasn’t quite as linear as it sounds, especially once step one was completed, but it’s not complete yet.

So, far, there have been 65 new appointments of senior executives- some internal, some not. Of the senior management team of 10 executive, only CFO Pete Myers was in his current job 15 months ago.

That’s a lot of change, and new executives don’t just spring on board fully functional- especially when the organization is being shifted or created around them. Indeed, it can be a bit hard to hire them until you know exactly what you are going to ask them to do and who you want them to manage.

Chairman Pollard said, “Those appointees cannot effect major change until they fully understand and evaluate what specific change is required and how to execute most effectively on that.”

“For example, in areas like IT or supply chain, we cannot just shake-up our disparate global systems and processes within a matter of months with all the disruption, cost, distraction and execution risk that brings. Our approach is and will continue to be to do things once and do them right, even if that takes longer.”

So patience is the reasonable and requested order of the day.

We find out a bit about how various brands are doing in each region. “The Americas remain our biggest challenge and opportunity,” CEO Fiske tells us. He thinks it will continue to be weak through the first half of 2015, with the second showing “…the potential for some recovery…”  It’s hard to know how to interpret that phrase.

Canada is down 17% this year to date “…on a like for like basis.” That means ignoring West 49. Brazil is off 25% and they are resizing and restructuring that business. “…Element U.S. will remain weak for some time as we are completing a major overhaul of the team there under our new global brand leadership model.”

“Europe has turned around, we expect that region to be profitable this year, and it is showing steady improvement. In the U.S., Billabong is growing again and RVCA is re-accelerating, with both brands showing strong forward orders for spring.”

As you know, Billabong owns seven brands in addition to Billabong, Element and RVCA. I find it interesting that the only one we hear about is Tigerlily, which we’re told has grown 20% annually in Australia over the last three years.   I speculated in an earlier article that I thought we might see some additional brand sales because of Billabong’s decision to focus on its big three and because they are committed to funding investments with “…cost reduction, productivity gains, and global scale.” I still think such a sale might happen because of that focus. And they could make good use of the cash.

Neil recaps Billabong’s seven pillar strategy, reminding us that they revolve around brand, product, marketing, omni-channel, supply-chain, organization and financial discipline. If you want to see what Neil says, download and read his speech here. It’s the first item under “Recent News.”

Much of what he discusses are the same things other companies have been paying more attention to since 2008 or so; ecommerce, inventory management, rationalizing sourcing and logistics, being cautious where you spend money, etc.   There’s nothing particularly unique about the steps Billabong is taking, but it’s very important stuff not just in controlling expenses, but in building brands.

I particularly noted the efforts Billabong is making in managing its infrastructure. Here’s the slide they showed. 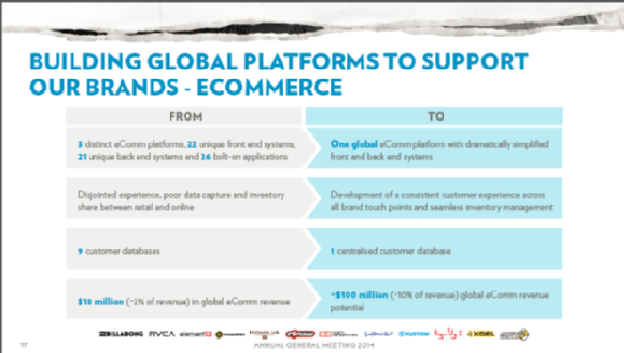 Slide’s a little hard to read.  Sorry.  You should come away from it realizing three things. First, that it was a bit of a mess and there’s a lot of money to be saved (though first they will have to spend some to make it happen). Second, that it’s going to take time. And third, that it has to happen if they are going to grow “strong, global brands.”  Operating well was always part of brand building, but in the days of the internet the two are even more closely related.

Baring an unexpected announcement, we’ll next hear from Billabong when they report their half year results this summer. I will look forward to learning how the turnaround is progressing.