I’ve been encouraged by a couple of readers to pay attention to SurfStitch, which I haven’t typically covered.  But now I am.  Turns out, it’s way too interesting not to.

SurfStitch (SS for short) is an ecommerce retailer through the three sites SurfStitch.com, Surfdome.com, and Swell.com.  It also has three sites it calls media platforms; Magicseaweed.com, Stabmag.com and Garageentertainment.com.  If you’re not familiar with them, it might be worth a couple of minutes to look at their sites before you continue reading.

Okay, I guess the place to start is with a chronology of events from their financial review.  You can see they were really busy between October, 2014 and December, 2015.  And not so much on running their existing business I guess. 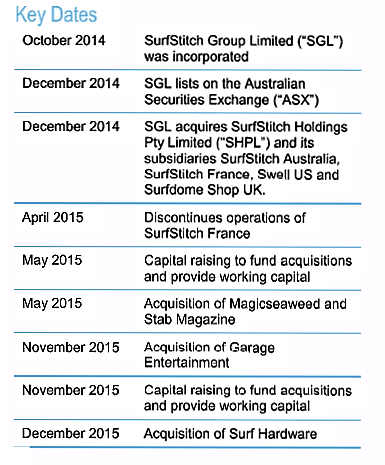 SurfStitch was founded in 2007 by Justin Cameron, Lex Pedersen and Haydn Smith.  Justin is the former CEO who joined the board of directors on October13, 2014 and left the board on March 9, 2016.  Lex Pedersen continues with the company as a board member and Director of Business Development.  Haydn Smith, as far as I can tell, is not on the board or in an executive position.

The current CEO, Michael Sonand, joined the board this past July.  In the conference call following the earnings release, he indicated he’d been CEO four months.  The first thing I did was listen to his presentation.  He came across as focused, in touch with reality, and has his priorities right with an initial emphasis on stabilizing the business and its cash flow.  That doesn’t make this an easy turnaround.

It’s time for a few numbers (all in Australian dollars).  Let’s focus on the reported numbers from the statutory financial statements.

Obviously, much of the change was driven by the acquisitions.  I could spend a whole bunch of time on pro forma statements and adjustments, but the bottom line sort of speaks for itself and that’s where the company is.

Let’s see.  What else should you know?  In December 2014 they did an internal restructure “…in preparation for the listing of the Company on the Australian Securities Exchange.”

Then, during the most recent year, the company “…commissioned an independent valuation of the identifiable assets acquired and liabilities assumed in relation to business combinations that occurred shortly prior to the internal restructure…as a result, the goodwill acquired as part of the internal restructure has subsequently decreased.”  The result was an incremental loss of $2.225 million.

So income was overstated right before the public offering?  Oops.  On page 97 of the report, we are told, “A firm of solicitors issued a media release on 11 June 2016 indicating it was engaged in a preliminary investigation of the Group, and invited shareholders to register their interest in participating in a possible class action.”  I’m stunned.  I’m also guessing that the $99.3 million of impairment charges in the most recent fiscal year associated with the acquisitions made not all that long ago (see the schedule above) hasn’t made shareholders feel any more charitable.

What has a very busy Mike Sonand been doing over the last four months?  Here’s how the report describes the situation as of June 30.  SS has three ecommerce and three media “platforms” as I’ve listed above. 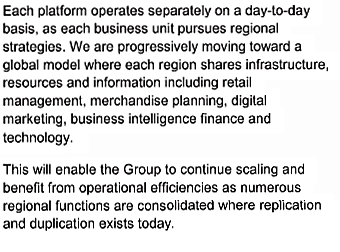 Here’s what the report says SS is doing or has done so far. 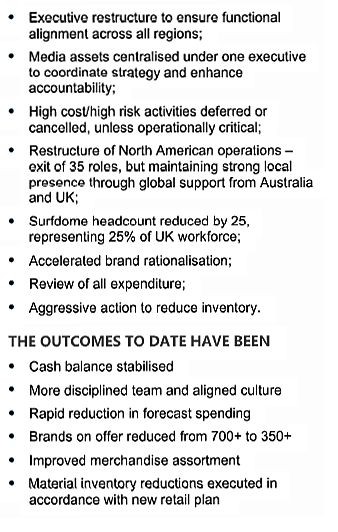 The work force reductions are pretty significant.  As to the brand reduction, I’m not sure I knew there were 700 brands much less that one company could carry them all.  They’ve also decided to divest Surf Hardware (acquired December, 2015) because it doesn’t fit their strategic model.  During the year, Surf Hardware generated $22.8 million in revenue and $8.1 million in gross profit.

I support the tactics Mike and his team are pursuing.  But now I’d like to ask a global strategic kind of question.  Let’s take a brief look at their three media properties.

Their plan for integrating these?  They tell us: 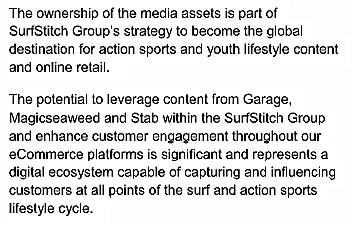 Perhaps a few regular readers are thinking what I thought when I read that; “Kinda sounds like GoPro.”

Like GoPro, SS has no proprietary technology.  Its products can be duplicated and sold by others.  Also like GoPro, SS is trying to succeed by building a customer community and differentiating itself utilizing its media websites and properties.  GoPro has the advantage of having its own editing software.  SS is also introducing SS branded product and expects it will “…eventually represent up to 20% of the Group’s product line.”

SS defines its target market as action sports and people interested in the related lifestyle.  GoPro is focused on what I’d call the active outdoors market.  As they currently define it, then, I’d say that SS’s potential market is smaller than GoPro’s.

But what I said about GoPro is also true for SS.  They might be able to build a defendable market niche based on creating a tight knit community utilizing their media assets to create that community.  Maybe.  But even if they do, I think it’s a niche that probably doesn’t support public company required growth and they’d be better off as a private business that could focus on the bottom line instead of the top.

It’s always nice to have a new CEO with nothing to hide or defend.  You get the straight story.  There is a lot more nuts and bolts analysis I could do here, but I don’t think it would be very productive in helping you understand the fundamental situation.  Let me conclude with three summary thoughts.

First, the rate at which SS went from a public offering in December of 2014 to its current condition in a year and a half is, at least in my experience, unprecedented.  I’ve never seen anything like it.  Would somebody who knows the whole story please call me up and tell me how it happened so quickly?

Second, this is an early stage turnaround where they seem to be doing all the right things and are making them happen quickly.  They didn’t have much choice.

Finally, I understand their strategy but have the doubts I expressed above about how it can work out.  SS would be better off as a private company.  It’s hard to be successful if you’re just an online retailer selling the same brands everybody else has.

Oh look, Globe has filed its report.  It’s turning into an Australian kind of two weeks what with Billabong being the last company I looked at.

[contact-form-7 404 "Not Found"]
The Future Isn’t Here Yet: Billabong’s Results for the YearGlobe Reports Annual Results. How Was the Second Half of the Year?
Scroll to top