Could this time really be different?

Recently, a couple of retail CEOs have been pointing out, or maybe bemoaning, the lack of a strong retail trend. They’ve noted how in the past they’ve been able to rely on such trends for big sales boosts and have explained their worse than expected performance partly by the lack of it.

They say, “But that will change.” I’m sure they are right. It will change.   Their implication, however, is that this is a traditional retail cycle of relatively short term duration. I’m not so sure about the “short term” part.

It’s a bit awkward for me to be asking, “Could it be different this time?” because I’m very aware of the cycles of history over decades and centuries. I know that in retail cycles, not to mention social, economic, and financial cycles, it has mostly turned out to not be different.

I’m going to compromise with myself and say it’s probably not different, but the time frame during which that becomes clear is going to be longer than we’re used to. The factors that are coming together guarantee a long, strange trip as the tidal wave of divergences works through our retail market. I’m going to look at what those are and try to reach some conclusions about succeeding in our industry.

Let’s start with overall economic conditions and debt then move on to customer behavior and how we sell to them. Next, I want to take a look at technology and what that means to the competitive environment. Based on that, I’ve got some ideas about how retailers and brands have to operate.

It IS the Economy, Stupid

I don’t think I need to spend much time trying to convince you that this economic recovery has been weaker than any since the 2nd World War. You are certainly aware that wage growth has been low to nonexistent and that job growth, especially for our primary customer group, has tended to be in lower paying jobs and often involve multiple jobs. Let’s call that group the millennials, though you’ll see below I think that’s an over simplification. When can we expect improvement?

Not for a while, and the reason is debt. I’ve recommended a book called This Time Is Different: Eight Centuries of Financial Folly by Reinhart and Rogoff. It’s so well researched that it’s hard to dispute their findings, but they are hardly the only ones acknowledging the problem debt is causing. Basically, they show that debt over a certain point leads to lower growth in an economy.

They suggest that growth starts to be impacted when total private and public debt as a percentage of GDP reaches around 90%. As of the start of 2015, by way of some examples, Canada is the cleanest dirty shirt at a bit less than 300%. The U.S. is about 375%, the Eurozone about 475%, the U.K. 500% and Japan, the hands down winner, is north of 650%. What probably won’t surprise, but should disturb you, is that total debt has continued to rise since the Great Recession.

Meanwhile, take a look at this chart showing real GDP growth in selected periods in the U.S. 2000 is the year the stock market bubble first burst. To my way of thinking, though the Fed stepped in and “saved” us, that’s when things started to go south in a noticeable way. 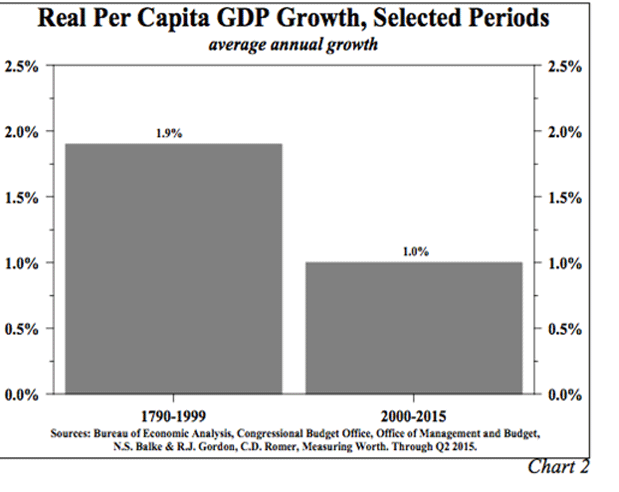 I borrowed” this chart and the data in the previous paragraph from Hoisington Investment Management’s review and outlook for the third quarter of 2015. You can get your own copy at http://www.hoisingtonmgt.com/hoisington_economic_overview.html. I highly recommend it.

I’ve studied enough statistics to understand that correlation does not necessarily equal causation, but I’m convinced that there’s a relationship between GDP growth and debt. It is kind of logical. If you owe money, then you have less to spend while you pay it back and pay the interest. If you choose not to pay it back, then the people you owe it to have less to spend.

I think we’re in a low growth period until we do something about our overall level of debt. Solving the problems will be unpleasant and, if avoided long enough, draconian. Please, please, please, email me and tell me why I’m wrong.

So the first thing we have to deal with is continued slow economic growth caused by over indebtedness. Let’s move on. I don’t have room for a good rant on the damage the Federal Reserve is doing with continued low interest rates.

Our customers are, uh, wait a minute. Who are they anyway? Seems like we, as an industry, are trying to sell to everybody from six year olds to baby boomers. A couple of individual brands seem to succeed with that, but mostly you can’t. I’ll spare you my oft repeated speech about the dangers of expanded distribution except to remind you that 1) growth requirements make it hard to be a successful public company in this space because of the requirement for regular, quarterly growth and once you get into broader distribution 2) they may know your brand but not your story and your competitive advantage goes away and 3) we’re way over retailed with too much indistinguishable product.

I also wondered a while ago if maybe distribution didn’t matter due to online and because good merchandising could overcome wider distribution. To summarize, I thought that once a product was ubiquitous in the online world and a click away, customer’s reaction to broader distribution might change. I’ve decided the answer is “no.” It turns out that getting retailers who’ve never been great at merchandising specialty product to do it well is expensive, challenging and time consuming. There’s also our continuing problem of a lack of product differentiation which poor merchandising just highlights.

Meanwhile, back to our customers. If we have to characterize them as a demographic, we’d say, “the millennials.” This is the group (much like my mom’s generation who’s formative years were in the Great Depression) that got slammed by the Great Recession. They are financially conservative (and will be for life), are having a hard time making a wage that allows them to live independently, are not particularly brand loyal (though if you can get them, you can keep them), are most influenced by their community (not your advertising), and are more interested in experiences. A product is something they seek in order to have an experience, rather than buy for the hell of it. They have the data to find exactly the right product with exactly the right attributes because they don’t want to screw up the experience. Don’t try and bullshit them.

Okay, now that I’ve defined our customers as a demographic, I have to tell you not to do that. In the days of instant, endless, information about anything, groups, trends, styles, points of view can come and go pretty damned quickly. And anybody who’s interested in them can find out about them and be part of the community they represent. It’s easier to say your customer is of a certain age, and it may be true. But it’s not an adequate description of who they are.

Notice how the term “fast fashion” seems to have disappeared? It’s like it’s no longer an aberration, but a permanent condition. This seems to require that companies be a bit reactive after all those years where being proactive was a virtue.

To go with a soft economy, then, we’ve got customers that are harder to get and keep and in general have less money to spend. I am just a font of good news today.

Let me remind you of two things I hear brands and retailers saying all the time.

Those two catchy phrases make a lot of sense and are indicative of two things. First, they tell us how much the customer is in charge. In the days of too much retail space, too many undifferentiated products and near perfect information, that’s probably inevitable. Second, we’re all trying to figure out how, exactly, to do this and the one thing we’ve learned for sure is that it’s really expensive. There’s an advantage here to big players with strong balance sheets, because the cost for a 50 store retail chain to do it is probably not that much different than for a 600 store chain. Let’s put it this way- the cost per store is lower for the larger retailer or brand.

When you accomplish it, you won’t have created a long term competitive advantage; you will have just bought yourself the right to compete. I’m not talking about using a POS system here. I’m saying that from design at the brand to returns at the retailer the systems have to be integrated to keep up with the speed and requirements of your customers.

Maybe you remember that a couple of years ago Rip Curl got itself in trouble. They tried to sell the company, but couldn’t get the price they wanted. So they decided to solve the problem the hard way.

They refocused on just being the best surf company they could be. They cut their product offerings by 50% and focused on the ones that their customers needed. They try to offer technology and quality that differentiate the products they do sell. They emphasized efficiency and reduced their distribution. They only sold places where they could make money. What a good idea.

In summary, their primary focus was on improving net income (and reducing working capital invested) rather than gross revenues.

It seems to be working, and regular readers will know I thoroughly approve of what they decided to do. Bluntly, I don’t think they had a choice. And neither do many of you.

The economy is making fast revenue growth difficult. Your customers (who can’t be simply identified as an age group any more) won’t buy what you tell them to buy, but what their community supports. They have endless choices and information. And the continuous investment required to satisfy their product and shopping requirements has gone through the roof- especially for smaller brands and retailers.

Do some surprising things. Perhaps completely outside of what your customers expect. Even contrary to your brand image. If you accept my premise that it’s tougher to get and keep brand loyalty in the days of endless, instant new brands, and that’s it’s damned near impossible to keep up with what’s “cool” anyway, why not surprise your customers this way? It’s a way to claw back a little initiative and not have to be reactive all the time in an impossible attempt to keep up with the rate of change.

Especially as a newer brand, focus on your web site and selling there. You can’t find the customers- they have to find you. Social media, etc. This minimizes marketing costs. What you do spend should be aligned with creating experiences. If you’re not going to grow revenue as fast as you once might have, make sure you’re selling at a price that gives you a solid gross profit. In your brick and mortar retail, be very cautious about whom you open and curate the hell out of them until you know they have you figured out. Do some temporary stores in surprising places for strange reasons. Never over supply.

It’s really a pretty interesting time to be building a brand as long as you acknowledge what I think are longer term conditions under which you have to operate. Rip Curl can watch some of its competitors flail as it just focuses on the bottom line with a business model that’s responsive to existing business conditions using some of the concepts I’ve briefly described above.

You can do the same thing.