Quik filed their 10K last week, but the holidays kept me from any serious analysis until now. The best thing I heard in the conference call was CEO Andy Mooney saying, “The organizational restructuring of the company is now complete and the management team focused singularly on execution.”   We’ve learned, as we’ve watched other industry companies go through turnarounds, that cleaning up and getting organized is incredibly distracting from just running the business well.

I’m going to start with a summary of the financials. The first thing that jumped out at me was the year over year decline in stockholders’ equity from $388 to $58 million. That’s not an unexpected result given the loss for the year of $309 million, up from a loss of $233 million the prior year. Total liabilities, however, fell only 2.8% to $1.2 billion. Long term debt (net of current portion) declined 1.9% to $793 million.

The net loss includes a one-time gain of $30 million on the sale of Mervin Manufacturing and Hawk.

Obviously, no matter how you like to calculate it, the debt to equity ratio went through the roof compared to a year ago. I’ve written before about the need to get the turnaround producing positive cash flow and profits before the balance sheet deteriorated too much further. I’m still thinking the same thing, only with more urgency.

Sales declined from $1.81 to $1.57 billion (13.3%). There are some things you need to be aware of around goodwill impairments and licensing revenues. But first, here are the summary numbers according to GAAP straight from the 10K, which you can review here if you want.  The numbers are in millions of dollars.  Let’s run through these numbers and I’ll add a little “color,” as they say in earnings conference calls. 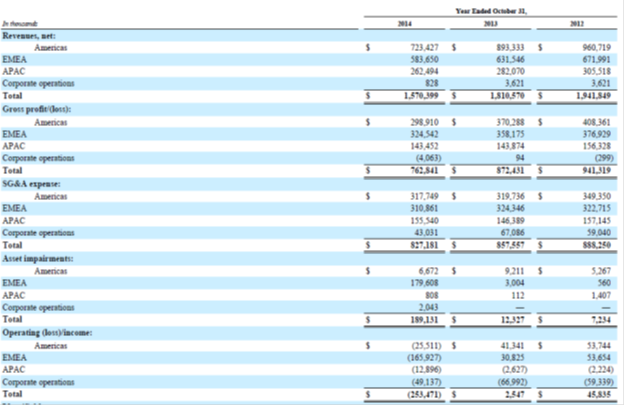 As you see above, revenues fell in all three regions. EMEA is Europe; APAC is Australia and the Pacific. The gross profit margin (not in the table) in the Americas declined from 41.5% to 41.3%. In EMEA it was down from 56.7% to 55.6%. In APAC, it rose from 51% to 54.6%. Overall, the gross margin rose from 48.2% to 48.6%. The increase “…was primarily due to the segment and channel net revenue shifts toward our higher margin EMEA and APAC segments, and retail and e-commerce channels versus our Americas segment and wholesale channel.” Gross margin dollars, you will note, were down in all three segments, though only very slightly in APAC.

You may recall that Quik is being selectively more aggressive on pricing, particularly on board shorts. If, while doing that, they can still improve their gross margin, it suggests that other parts of their program must be having some success. The caveat is that I don’t know the extent or breadth of those price reductions.

Worldwide, wholesale business fell from 71% to 67% of the total. Brick and mortar rose from 25% to 28% and ecommerce was up from 4% to 5%. Quik ended the year with 683 company owned stores worldwide including 147 factory outlets. 100 stores are in the Americas. EMEA and APAC have 296 and 287 stores respectively. Those numbers do not include 252 stores “…licensed to independent third parties in various countries.”

I’d be curious about the financial model for those licensed stores. Does Quik get a fee for the licensed name and then sell them product at the same prices as to other independent retailers? Are they involved in merchandising? Anybody want to put a comment on my web site about how that works? You might as well as long as you’re hear reading this anyway.

DC revenues were down 21%, falling from $542 to $427 million. $10 million of the decline was due to licensing. We learn in the conference call that additional categories may be licensed in the future.

I have no doubt that licensing the peripheral product categories is a good financial decision. But not long after it happened, I walked into my local Fred Meyers for my groceries and saw in their ad, “Quiksilver Kids- 25% off!”  Anyway, I worked my way to the clothing section and there in fact was the Quik and DC kids merchandise with a big sale sign on it.

So, I know it’s just the kid stuff, and I know it was a good financial decision, and I know I lack objectivity about this. But, damn it, it’s still representing the Quiksilver brand and I hated seeing it there and I hated the thoughtlessness with which it was merchandised and I hated what it was surrounded by. Okay, they needed to do it, and it was somehow the “right” decision and all that and it still depresses me to think about it.

Take a look at the SG&A expenses in the chart. The biggest reduction was in corporate operations ($24 million of the total reduction of about $30 million). Actually, I guess that’s what you’d want to see- spend the money in the places that can drive sales and profits. That’s generally not the corporate offices.

As a percentage of sales, however, SG&A expense rose from 47.4% to 52.7%. Obviously, that can’t continue. They note in risk factors that “We may be unable to continue to reduce SG&A at the same pace.” No kidding. I suspect Quik isn’t finished taking costs out of their supply and logistics chain, but SG&A can’t go down forever.

Promotion and advertising expenses totaled $78 million for the year. In the two prior years, they were $93 and $118 million respectively.

Now we get to the asset impairment charge of $180 million in EMEA. Yes, it’s noncash. Yes, it’s “one time,” though there always seems to be a new one charge time in the following year (Not just talking about Quik). No, that doesn’t mean you can ignore it. It is an indication of a real decline in future cash flows and the value of those assets.

Okay, almost made it to strategy. Just a few more financial comments.

The allowance for doubtful accounts has increased from $57.6 million at the end of fiscal 2012 to $60.9 million at fiscal 2013 end and $64 million 2014 fiscal year end. This has happened while sales fell 20%. Not necessarily supposed to work that way.

Also looking at the balance sheet, the current ratio has fallen from 2.49 to 2.13, but that’s still okay. Trade receivables were down 22.4%- more than the decline in sales. The same is true with inventories. They were reduced by 22.3%. They reduced the average day’s sales outstanding by four days to 93 and inventory days on hand from 122 to 118. Good work. I will not be surprised to see further improvement in the inventory numbers.

Interest expense was $76 million, up from $71 million last year and $61 million the year before that. Most of their long term debt is fixed rate, but the rates are between 7.8% and 10%. The first maturity of this debt is December of 2017.

Nothing surprising there. I’m guessing every company would like to do that. You can read the details on page one of the 10-K. I see some progress in numbers one and three. Obviously, given the financial results, we aren’t there on number two yet. However, CEO Mooney tells us, ”Looking at the year ahead, we are pleased with our order book for spring ‘15 as it represents the stabilization of the business beginning in Q2 providing a foundation for significant EBITDA growth in 2015 with top line and incremental EBITDA growth coming in 2016 and beyond.”

Basically, he’s calling the bottom. And none too soon I’d say given the balance sheet. CEO Mooney projects a 2015 revenue increase “…in the low single digit range normalized for categories transitioning to a licensed business model.” They expect “proforma adjusted EBITDA” (whatever that means) to be $80 to $90 million assuming current exchange rates. Nobody is projecting a profit, though they expect positive free cash flow in 2015.

They make this statement in the 10-K:

“We believe that the integrity and success of our brands is dependent, in part, upon our careful selection of appropriate retailers to support our brands in the wholesale sales channel. A foundation of our business is the distribution of our products through surf shops, skateboard shops, snowboard shops, sporting goods stores, and our own proprietary retail concept stores, where the environment communicates our brand and culture. Our distribution channels serve as a base of legitimacy and long-term loyalty for our brands. “

You won’t be surprised I agree with that statement though, bluntly, I don’t quite see Quiksilver as having completely taken that approach since Andy Mooney became CEO.  But I’m partly willing to give them a pass because of the turnaround they had to engineer and are still engineering. There are some comments in the conference call about a being less promotional on their web site to support the core business and you’re aware they pulled DC back in distribution partly to address these issues.

With regards to marketing, Andy notes, “On marketing we went a little bit darker [in] marketing candidly in the transition, but we will come back with the vengeance in the spring as we said 40% increase in media. That media will be spent almost solely in core skate, surf and snow magazines in both print and vertical specifically to drive that business in the key markets of North America, Europe and Australasia. We are also going to increase our marketing spending in terms of point-of-sale presentations within the core surfer retail accounts reinvesting in grassroots and activating marketing the athletes that are important to those accounts and the consumers who shop in those accounts…”

That seems like a step in the right direction.

Given where they’ve come from, I really don’t dispute most of the operational steps Quik has taken. I haven’t liked seeing them all, but I understand them. I’m guessing we’re mostly though with SG&A reductions, though I’m thinking there might be some more improvement in gross margin through more inventory and supplier rationalization. For me, it’s right now about timely sales increases that improve cash flow to manage, and ultimately improve, the balance sheet.  We seem to have arrived back to where public companies in this industry always get- can you build strong brands while growing revenue enough to make wall street happy?

[contact-form-7 404 "Not Found"]
Altamont Acquisition of Hybrid; the Plot ThickensMobile- That’s What Matters
Scroll to top