A reader sent me this article discussing how retail seems likely to evolve.  Why don’t you go and read it before I offer my comments?

The author (Doug Stephens) and I are, in general, in violent agreement about the direction and speed of retail change.  We further agree that if you, as a retailer are paralyzed by uncertainty and aren’t at least trying to keep up and figure out how to change, you’re in trouble.

I’d like to discuss a few of his specific comments as well as some things he doesn’t say with a particular focus on financial implications.  Most importantly, if you see this article as depressing bordering on terrifying rather than thinking to yourself, “Ha! A lot of my competitors are going to be paralyzed and there’s endless opportunities with all this change,” you’re likely to be among the road kill rather than a top end predator.

Start by remembering that there is simply too much retail and part of your job is to live to fight another day.  Build your balance sheet.  May have said that a time or two before.

Doug starts by talking about Ron Johnson’s attempted turnaround of JC Penney.  He tells us the stakeholders didn’t have the intestinal fortitude for what he had to do to resurrect JC Penney.  There’s something to that, but the other thing they didn’t have was the money.  They all could have been on board and excited and I think they still would have run out of cash before they pulled it off.  It’s the balance sheet thing again.

Remember what JC Penney was trying to do.  The company had a large group of customers who had a certain set of expectations and image of JC Penney.  Mr. Johnson was determined to make them think differently about the company and its stores as well as attract some new customers.  He decided that JC Penney needed to gut its decades long competitive positioning and adopt a new one.  He wasn’t wrong about the need, but he wanted to adopt a market position already occupied by competitors well established in that space.  Could it be done?  Well, I guess, maybe, eventually.  Did it make financial sense?  I’m not so sure about that.

Meanwhile, look at the chart below showing price increases over 20 years.  Apparel may not have gotten more expensive, but if you believe this chart, everything we need to buy before we look for a new pair of jeans has.  And this at a time when wages for most people have not risen much.  Difficulties in retail aren’t only the result of the internet. 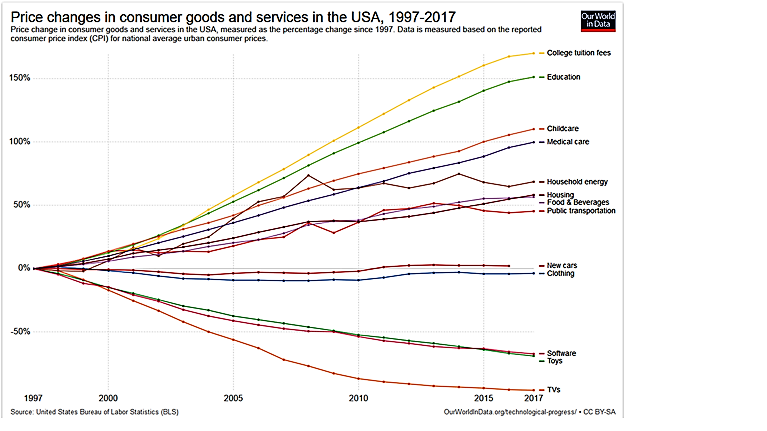 Doug proceeds to list six trends in retail.  The one thing you must not do is read through them and throw yourself off the nearest tall building.  Are they all valid to the evolution of retail?  Sure.  Are these the only things that will happen?  No.  Doug’s crystal ball is no better than ours.  Will they all happen at the same speed and with the same impact over the same period of time?  Nope.  Will some good, surprising things nobody anticipated happen?  Yes.

You’ve got take these as things to think about; how can you make them work for you?  I’ll say again this is about being in front of your paralyzed competitors.

Talking about the retail model exploding, Doug says, “If you’re fortunate enough to sell something no one else on earth sells you might dodge this bullet. If not, you better find a new way of making money.”

He’s talking about the breakdown of the wholesale to retail model and he’s right that it’s happening.  That shouldn’t surprise anybody.  But there are lots of successful brands and retailers who don’t “…sell something no one else on earth sells…” yet somehow are still in business.  By the way, when I say “retailer” I’m talking online as well as brick and mortar.  Do you have to compete?  Sure.  Do you have to differentiate your product from your competitors?  Sure, but that’s hardly new.

The only person I know who had a product nobody else sold was the Roman Marcus Crassus (from whom we get the word “crass,” which tells you something about his personality).  He owned the only fire department in Rome.  When a house was on fire, he’d show up and negotiate with the owner to put it out, settling on the price before he started.  He ended up being the richest guy in Rome.  Think of the margins!  But then, of course and inevitably, the competition came in.  Eventually, putting out fires became the responsibility of governments, and you can certainly understand why.

Doug also says, “Stop thinking ‘product’ and start thinking productions.”  Experiences are definitely in.  But at what price?  If you can figure out how to give the consumer little experiences that surprise them, you’re moving in the right direction.  If they are big (expensive) experiences they need to appeal vicariously to a whole lot of consumers.

Experiences cost money.  Being on line costs money and has to do more than cannibalize your brick and mortar sales.  Getting more new products and brands to your customer faster costs money.  Making it possible for them to buy when and how they want costs money.

The financial ramifications of what Doug describes are significant- especially if you want to be one of the ones that make it through consolidation.  Partly, you have to do is the same old thing- differentiate your product from that of your competitors.  But it’s gotten a whole lot harder as power has devolved from the brands and retailers to the consumer.

[contact-form-7 404 "Not Found"]
Some New (or Not) Retails IdeasRetailer Plans to Go Public. Wait…Now?…A Retailer?…Really?
Scroll to top