Back in 2012 A&F had 946 U.S. stores.  They ended the most recent quarter with 684 (plus 195 international stores).  In the immortal words of Gary Schoenfeld in his first earnings conference call as CEO of Pac Sun however many years ago it was, “Nobody needs 900 Pac Sun stores.”

Nobody needed 946 A&F stores either.  Given how the retail market is changing, the 28% reduction was probably a great thing, if not part of the plan.  It’s even more interesting to note that 400 of the U.S. stores are Hollister and only 284 are A&F branded.  Those of you who have been around a while may remember, when Hollister opened (the first store was in 2000), that as an industry we were pretty dismissive of the concept.  Don’t know if that’s because we didn’t think it would work, were afraid of it, or wished we’d thought of it first.

The balance sheet is in good enough shape does it doesn’t require much discussion. $520 million in cash and equivalents, a current ratio of two to one.  There’s almost no increase in inventory from a year ago.  There’s $250 million in long term debt, and equity is down a bit over a year, but the liability structure is adequately supported.

Let me say something in general about inventory that I’ve said before.  Successful companies are going to have less inventory for a given volume of sales.  This has got to be the required result of improved logistics, better customer data, and active brand management.  In the conference call, CFO Scott Lipesky says, “We continue to leverage our ongoing transformation initiatives to improve long-term inventory productivity.”  That’s not just about having less inventory- it means having the right inventory in the right place, amounts, and at the right time.

The gross profit margin was unchanged at 61.3%.

Well, they reduced all their costs.  Obviously.  Stores and distribution expense, as a percent of sales, declined from 43.8% of sales to 43.2%, or by $4.1 million.  This was “…due to expense reduction efforts within store occupancy expense, partially offset by higher direct-to-consumer expense as a percentage of total net sales. For the third quarter of Fiscal 2018, store occupancy expense, a component of stores and distribution expense which includes rent, depreciation, utilities and other store expenses, decreased as a percentage of net sales by approximately 130 basis points as compared to the third quarter of Fiscal 2017.”

Marketing, general and administrative expense as a percent of sales fell from 14.5% of sales to 13.6%, or by $7.4 million.  However, charges for certain legal issues went from a cost of $11.1 million in last year’s quarter to a benefit of $3.0 million in this year’s.  That’s a $15 million improvement by itself.

Sounds glorious, but for the nine months ended November 3, the company reported a loss of $22.4 million.  That’s down from a loss of $67.1 million in the nine months in the previous year.  And without the $15 million improvement from legal fees, operating income for the current quarter would only have risen from $18.2 to $21.8 million.

Strategically, here are the four major initiatives A&F is pursuing, as shown in the investor presentation that went with the conference call. 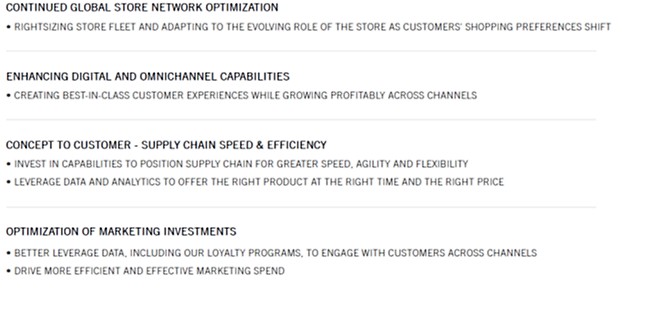 Now, those are the four basic things that everybody needs to be doing.  Unless you got started on them very early, they are not a source of competitive advantage- they are just what you have to do to play the game.  I suppose they give you an advantage in the sense that those who aren’t doing them are unlikely to be around.

A&F management highlights in a number of places how customer centric they have become in everything they do.  I hope so.  As CEO Fran Horowitz says, “We continue to focus our execution on aligning product, voice and experience in order to drive traffic and conversion across channels.”

They have, he tells us, closed 450 stores since 2010 and 60% of their U.S. leases are due for renewal by 2020.  Time, money, and effort is being spent on figuring out how many stores they need, where, and in what configuration.  Expect more store closings (as well as openings).

He says, “In the third quarter, we delivered 28 new store experiences for our customers including 11 new stores, five right sizes and 12 remodels based on a combination of improved performance and better lease terms, we now expect to close up to total of 40 stores in 2018 a third fewer than originally expected. At the same time, we remain focused on rightsizing our store fleet and driving store productivity.”

He also talks about taking what they are learning and how it is being applied to their international presence.  International scale and the ability to find new brands and ways to merchandise and operate across cultures, taking the best from each, may be a longer-term advantage.

A&F expects to “…exceed $1 billion in digital sales this year.”  CEO Horowitz talks about leveraging “…shipping costs on DTC sales driven by our transformation efforts.”  I’d like to know more about their fulfillment.  As you know, I believe all retailers are going to be driven to in store fulfillment for both cost and customer relation reasons.

They also note that they get 25% of their U.S. goods from China.  They have supplier in 17 countries and are prepared to use them to manage any problems resulting from tariffs.  If anybody wants to explain to me why tariffs are ever a good idea, I’d love to hear the argument.

Abercrombie & Fitch talks like they are doing all the right things and seem to be getting some results.  But everybody puts their best foot forward in the conference call.  My sense is they were a bit late in getting started (they can join the club) and some more quarters are going to have to pass before clarity is achieved.