I stole the chart below from Clusterstock (It’s not stealing if you confess, is it?) and wanted to share it with you. Look at the unemployment rate for our prime customers; the young workers aged 16-24. It’s close to 20% as of May. Now, if you’re in skate you go younger than 16 and if you’re in apparel, you’ve got some customers over 24 but it’s still relevant information.

The good news is that you’ll notice that this group has only for one period of time had an unemployment rate of less than 10% since 1974 so the baseline employment rate you should compare this with isn’t as low, thank god, as for the other groups of workers shown.

But my reading of the chart is that, as an industry, we tend to do well when that unemployment rate in this group is falling and to do, well, not so well when it’s rising. Not much of a surprise.
The other thing I wonder about is the extent to which this group, in our industry at least, is supported by their parents. As usual, wealthier, professional people are been less impacted by the recession and their kids are often our customers.
How can you make use of this information? Maybe by watching it on the Bureau of Labor Statistics web site. I’m pretty sure that a drop in the unemployment rate for 16 to 24 year olds would be good news for us- and for the younger people who got jobs. 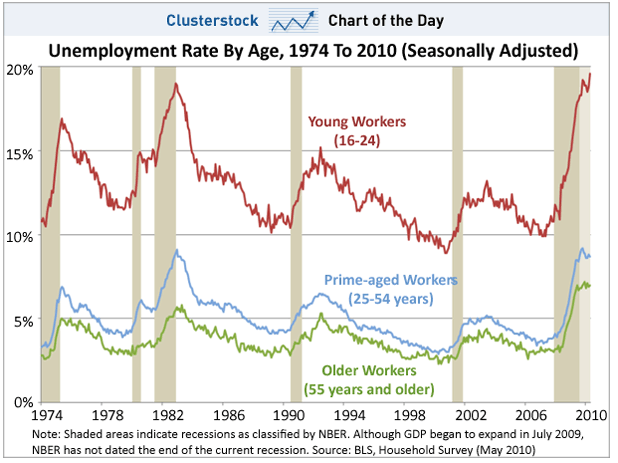