You know, this is getting boring.  So boring, though in a good way, that I think I’ve just used the same title for two quarterly reviews.

For the quarter that ended December 31, VF revenues were up 8% to $3.9 billion compared to the same quarter the previous year.  They got to that amount from $3.649 billion in last year’s quarter with $313.7 million in growth of already owned brands, $57.6 million in acquisitions, and a decline of $23 million from sales of brands and $57.4 million from foreign currency.

The two charts below show the breakdown for this and last year’s quarters by market segment.  Here are things to think about as you review them.

Remember that the jeans segment, where revenues declined quarter over quarter, is disappearing from VF via being spun off as a separate public company.  VF doesn’t think jeans is a category which fits the positioning of its typical brand or has the growth potential it expects.  I think they’re right if only based on the segment’s performance.

You may also recall that they changed the segment some of their brands are in.  The most notable was moving Vans from outdoor to active.

All three, you already know, include footwear and apparel.  Consider the supply chain and inventory management flexibility this gives VF (or any other company) that has a large number of contract and owned manufacturing plants. To take the simplest example, a Vans t-shirt may be exactly the same as a Dickies t-shirt as a North Face t-shirt except for the graphics.

I’m curious to know how much of the work segment is actually for work as opposed to “work-inspired” and where VF sees the growth opportunity.  I’m guessing in work-inspired but wonder if that’s a long-term trend VF can count on.

The chart below shows total segment revenue and operating profit for each of the two quarters.Note that operating profit is rising in all the segments except jeans, which is being spun off. 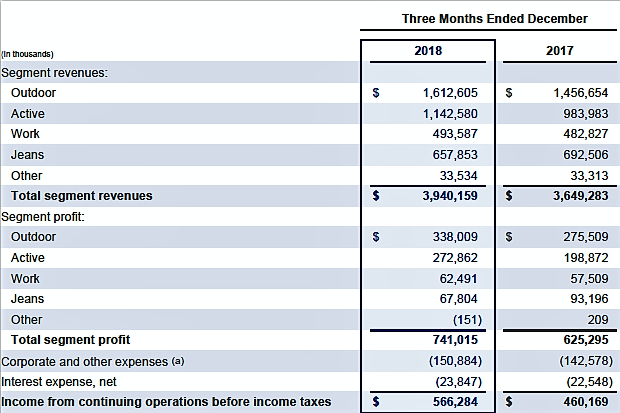 Active revenues were up 16%, with Vans up 25%.  Management acknowledges in the conference call that a brand the size of Vans can’t grow this fast forever.  But they believe it can sustain low double-digit growth “…in line with their five-year commitment in fiscal 2020.”

“Selling, general and administrative expenses as a percentage of total revenues decreased 140 basis points…during the three…months ended December 2018…compared to the 2017 periods. The decrease…was due to leverage of operating expenses on higher revenues and was partially offset by expenses related to the acquisition, integration and separation of businesses.”

You will perhaps note that I’m not discussing which business were sold or bought and with what impact on financial results.  Nor am I talking specifically about the restructuring expenses they mention.  These comings and going and associated impacts are at a higher than normal level right now, but generally I see them as part of VF’s ongoing strategy, so I’m not trying to separate them from operating results.

Store count was unchanged from a year ago excluding the impact of acquisitions.

Wholesale business was up 7% organically including 35% in China and “high single digit growth” in the U.S.  However, taking out the Kontoors (the jeans spinoff) business that growth was “…at a low double-digit rate…” organically.

VF has some projects going on (they especially mention The North Face) to refurbish and resell product.  We’ll see more of that from many brands.

What is it that VF is doing right?  First, it doesn’t hurt to be big.  Size gives you, these days, access to cheap capital.  It also means that you get, in the words of CFO Scott Roe, “…to maintain our level of investment as our revenue increases and we will start to leverage that inflection point hit this year.”  They can, that is, make their sales and marketing budget decline as a percent of revenues.

Second, they’ve managed to stay flexible even with their growth.  Third, their management processes and discipline seem rock solid.  If you’ve never seen it, go to this page then click on “Presentation” to download the PDF on their plans for Vans.  At least page through it.

Here’s what CEO Steve Rendle says in the conference call.  “What’s you’re seeing really is the result of two, three years of really intense work of cleaning up the marketplace, segmenting the customer base and now placing the appropriate products in each of their key retail partners, be it specialty to some of the large nationals. You’re seeing improvement in quality of products. So that is resulting in the velocity of sell-through that prompted that pull forward of the Q4 into Q3…”

VF sees their competitive advantage as their ability run their business better than the competition- partly because of their size.

What could go wrong?

Well, Timberland isn’t working out yet.  Vans, as they’ve acknowledged, can’t continue to grow 25% a quarter, their expectations for China may not pan out, the jeans business isn’t working out, it will be interesting to see if work continues as a fashion trend, and (a problem everybody has) we’ll see how well positioned their brands are when the inevitable recession hits.

For now, though, you just have to be mostly impressed with what they are accomplishing.

[contact-form-7 404 "Not Found"]
Trade Shows in General, Denver, SIA, ShopTalk, and Other Random MusingsThe Evolution of Sustainability and Implications for your Business Model
Scroll to top