Emerald and SIA are kind of, for now anyway, joined at the hip due to their ownership/continued involvement in the Snow Show.  They are both trying to respond to profound changes in the active outdoor market that are changing their business models.  I thought I might kill the proverbial two birds with one stone and see how they’re both doing and speculate on where that interrelationship might go.

As I see it, the decline is the result of uncertainty in the tradeshow environment.  Emerald’s oft stated strategy was, and continues to be, consolidating a fragmented industry through acquisitions and then to get some organic growth out of those shows through better management.  But with attendance declining, more focus on consumers, the cost/benefit equation not as favorable to shows as it used to be, and the role and need for shows changing in ways I admit I haven’t figured completely out, how do you determine the value of an existing show and how to add value through your corporate expertise in the way you historically have?

Seems to me that the price Emerald is willing to pay for a given show has to decline in this environment to justify the increased risk.  We’ll see how the sellers of trade shows feel about that.

Meanwhile SIA, either through superlative negotiating skills, insightful analysis of the future of trade shows or excellent timing (probably some of all three) managed to sell the Snow Show to Emerald at the exact market top for a solid price.  They also undertook some downsizing and expense management I think was due, but they are now left with figuring out just what SIA’s role in the industry is and why its members should care.

Below is Emerald’s income statement for the quarter ended March 31.

As you can see, revenue fell 3.4% from last year’s quarter to this year’s.    All expenses were up substantially, with the inevitable result that operating and net income took big hits- down 30.5% in the case of net income.  85.1% of revenue came from trade shows during the quarter, with “other events” and “other marketing services” accounting for the remainder.

The balance sheet shows a decline in cash from $27 to $10.9 million.  Current assets fell from $162.6 to $115.5 million while current liabilities rose from $227 to $253 million.  The size of the term loan is down year over year from $547 to $523 million, but in this year’s quarter, there’s also a loan under a revolving credit facility of $25 million that isn’t there in last year’s quarter.  Including that, debt is essentially unchanged over the year.  Equity has fallen from $798 to $733 million.  They said in the conference call they don’t expect to reduce their debt further in the foreseeable future.

Emerald, then, has some challenges.  They show up in its financial results, the stock price, and that in the 10Q and conference call, they really don’t seem to have a solution except to try and do what they’ve done in the past better.

With that in mind, let’s talk about SIA it’s goals, challenges, and relationship to Outdoor Retailer (owned by Emerald).  Below is a little picture showing Outdoor Retailer/Snow Show booth costs per square foot. 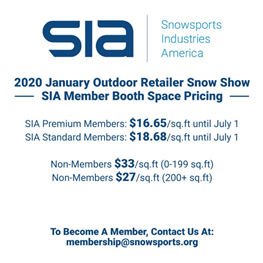 You can see the rates for SIA members and for non-members.  Aren’t you glad you’re a member?  But I seem to recall that the rate the last year SIA owned the show was $12.50 a square foot.  And that hotels were a lot cheaper.  Maybe I’m imaging the hotel thing, but I don’t think so.  Too many other people are imagining it.

Those of us who went to OR have gained the convenience and cost savings of going to one show instead of two, but that one show is getting more expensive.  SIA seems to be having some success in keeping rates from going up too quickly but recall Emerald’s financial results.  If they’re really getting something north of $27 per square foot from non-SIA member exhibitors, why would we possibly think they’d feel relaxed and all warm and fuzzy about keeping the SIA member rate lower?

In spite of SIA’s best efforts, I have a hard time imaging that the booth rate isn’t going to keep moving up.  Emerald is a public company that’s making a profit, but that profit has declined.  The question OR/Emerald have to contemplate is the elasticity of demand; will increasing show costs lead to people not coming and/or reducing their booth sizes?  Given overall industry trends, and the trade show environment in general, I’m inclined to say yes.

Meanwhile, SIA is having to sell itself to the industry, demonstrating how it’s going to bring value that justifies joining and make use of the $17 million it sold the show for to increase that value.  Remember, SIA has never had to market itself before.  You had to join to go to the only national show we had and, in different economic circumstances and before online became as dominant as it’s become, you pretty much needed to be there.

There’s a role for SIA in research, education, representing the industry on issues like tariffs and climate change, perhaps in hosting some kinds of gatherings and I imagine in other areas.  But its members have to see the value and the value has to be there to see.

When I first stumbled into snowboarding in 1991, I found an action sports/active outdoor industry that was pretty unsophisticated in its approach to business.  Were there exceptions?  Yes.  Has it improved?  Some.  But I keep talking to experienced executives new to the industry who are surprised by a general unwillingness to urgently embrace new ways of thinking and doing business even as the competitive environment changes literally daily.

SIA has to overcome the reluctance to change- Lots.  Now. Continuously. Thanks to the sale of the show, they have a balance sheet that allows them to do that.

Emerald, it should be clear, has some challenges to overcome as well.  Acting CEO Philip Evans put it like this in the conference call.  “As I noted on the last earnings call, while we remain opportunistic in our acquisition activities, we have to some extent slowed down our outreach in order to ensure that our team is appropriately focused on addressing the challenges and opportunities in certain of our existing brands.”

I agree with him.  Until they can address those challenges, why buy more shows that probably have similar challenges as the role of trade shows, and their value, changes.

SIA and Emerald both have some work to do to figure out what their stakeholders value and how to provide it.  But in both cases, they have to worry about the “shoot the messenger” problem.  If they do their jobs right, I am pretty sure that correctly identified urgent issues and the possible solutions will make a bunch of those stakeholders uncomfortable.