With its restructuring expenses largely behind it ($55.3 million since February 2016) and net sales up 19.5% for the quarter ended June 30 compared to the same quarter last year, Deckers reported a good result.  Sanuk continues to be the laggard, and I still won’t be surprised to see Deckers management sell the brand, though for orders of magnitude less than they paid for it.

Revenue rose to $251 million from $210 million in last year’s quarter.  The chart below compares revenues for both quarters and shows the percentage change for each brand.  Also included is the breakdown between international and U.S. revenues. 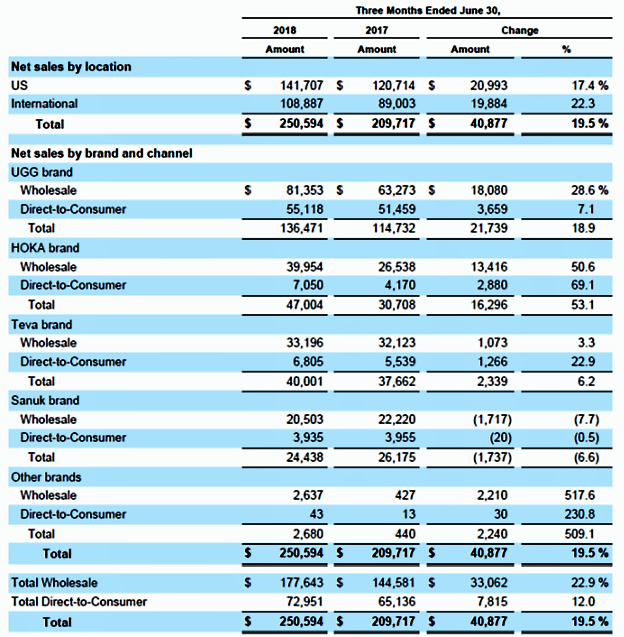 Note the continued dominance of the UGG brand and the revenue growth of all the brands except Sanuk, which was down 6.6%.  They report in the 10-Q that “Wholesale net sales of our Sanuk brand decreased due to a lower volume of pairs sold primarily driven by lower performance in the US surf specialty channel and lower international sales in connection with our strategic focus on US markets for this brand.”

The gross profit margin rose from 43.2% to 45.9%.  The increase “…primarily driven by favorable foreign currency exchange rate fluctuations, improved full-price selling compared to the prior period, and lower input costs as we execute our supply chain initiatives as part of our operating profit improvement plan.”

Remember that corporate tax rates are lower this year.  As with other companies, this is Deckers’ weakest quarter.

Below is a table showing the operating income by brand and the change from last year’s quarter.  Note that all the brands are up except poor Sanuk.  Deckers also has some work to do on its direct to consumer business and has been busily rationalizing its brick and mortar footprint, and this may lead to some further charges.

They make a comment that Sanuk’s lower operating profit was the result of lower sales offset by higher gross margins.  Hopefully, that’s in indication of distribution getting cleaner.

The balance sheet is solid, and I’d note a small inventory decrease from $442 to $436 million even with the sales increase.  I love the turnaround in cash from operations.  It was a negative $7.35 million in last year’s quarter.  It’s a positive $8.07 million in this year’s.

Deckers has improved their spending efficiency, and the benefits will continue to grow into fiscal 2020.  They’ve improved their distribution.  CEO Dave Powers says, “We have closed a few hundred doors over the last 18 months, and are really focusing on the top 15 strategic accounts that are driving the majority of the volume.  We’ll continue to do that.  And I think naturally there’ll be some accounts that will close on their own, just continuing through the marketplace disruption that’s happening out there…”

There’s a lot of that kind of distribution consolidation going on.  Advantage, big players.

Deckers is continuing to rationalize its brick and mortar business.  I’d feel better if I heard them talk more about how they are tying it to ecommerce.

Higher sales with a higher gross margin, improved distribution, and lower SG&A as a percent of revenues is a good thing.  Sanuk is a bit of a fly in the ointment and I wonder if its potential justifies it being part of a public company.

[contact-form-7 404 "Not Found"]
Strategy, Housekeeping and the Numbers: VF’s June 30 quarter.Globe Had a Good Year- But It’s Hard to Tell How They Did It
Scroll to top