Before I dive too deep into the financial weeds, let’s look at VF’s overall strategy as explained by CEO Steve Rendle and Chief Financial Officer Scott Roe in their conference call discussing the results for the quarter ended June 30, 2017.

Steve: “…while we expect the retail landscape to remain uncertain, we will invest against our largest growth opportunities to create momentum rather than wait for it.”

They have the cash flow and balance sheet to do this.

Scott: “…we remain sharply focused on fundamentals even at the expense of a little bit of revenue growth in the near-term.”

Get the brands, distribution, and systems right to grow the bottom line right now.  The top line will follow as things improve.  Even if that takes a while, VF will be positioned both for now and for the future.

Scott: “…in a marketplace that continues to experience significant disruption, we believe we have a unique investment and growth opportunity when many of our competitors are on their heels.”

Part of the opportunity comes from VF’s competitors shrinking and/or going away.

Scott: “We’ve reduced our off-price sales. We’re focused on — not bringing excess inventory into the channel and we’re seeing more full price sell-through along with better D2C and digital. Those things are all pretty virtuous from a gross margin standpoint.”

Once again, they are striving to get the stuff below the revenue line right.  That works well right now and eventually, will filter back to the top line.

Steve: “…about a quarter of that $40 million [in incremental investment] is going against demand creation within our big three brands in D2C and digital. We expect that to have an impact this year and into next year, but half is around specific strategic priorities. Design and innovation, data and analytics, our digital platform, absolutely continuing to move on advanced manufacturing and innovation projects we have in play there and then talent.”

Others who can afford it are investing in the same things.  Remember, VF owns some of its own manufacturing, giving them a big advantage in flexibility.

Steve: “…what we’re looking at there is really the end-to-end process of product creation and everything to do with going to market. We’ve got a number of projects…where we’re really tearing down the timelines of product creation, as well as manufacturing and looking at where can we take time out, how can we use digital technology to advance our ability to be more agile. But it’s also true, the integrated marketplace strategy, segmentation, and merchandising very specific collections to the distribution choice and building really well articulated — well merchandised collections and flowing them in a more relevant and consistent way. So moving away from this old wholesale model…to being present more often through more thoughtfully merchandised lines and its challenging every aspect of our product creation cycle. Our supply chain is deeply involved in this project and really helping shepherd how our product creation teams are looking at this, and how they can be more integrated in thoughtful, in improving our speed to market.”

Note especially the phrase, “…moving away from this old wholesale model…”  As I’ve written before, the advantage is with the consumer, and it’s expensive to respond to that.

I’ve got one caveat and a few comments on those quotes.  The caveat is that I’m taking those quotes from their conference call.  As with all public company conference calls, management isn’t necessarily looking to highlight things that aren’t working.  They’d prefer we all revel in the glory of their strategy.

I think they are doing the right things.  But there’s a defensive component to it and an element of positioning themselves for both the consumer being in control and the recession that, someday, we’ll have.  One of the things you can learn from VF is how they work to take some of these negative aspects and turn them into competitive positives.  Now on to my comments.

Whatever happened to the term “omnichannel?”  I am the only one who thinks it’s sort of disappeared?  As we’ve started to become more sophisticated about the consumer and what relationship they want with us, I think it’s become meaningless.  Or maybe we just realized that Amazon was doing okay without being “omnichannel.”

VF, and most of the other companies who are brands and retailers, bemoan the softness in the wholesale market- especially in the U.S.

Remember the days when brands first started selling on line and opening their own stores and they swore how they weren’t actually competing with their specialty retail wholesale customers?  There were even some explanation of why it would be good for those retailers.

How’s that worked out?  It’s not that things wouldn’t have been tough for smaller retailers anyway.  It’s not that I wouldn’t have made the same business decision as the large brands and opened retail stores.  But to claim it wasn’t competition?  What a load of happy horse shit that was.  Industry wide, the people who are experiencing a decline in their wholesale business are the ones who caused it.

I’ve had enough to say about trade shows lately.  But go back and read Steve’s quote about moving away from the old wholesale model and being more agile.  That is part of what’s changing the purpose and value proposition of trade shows, as well as making it hard to know just when they should happen.

Sales for VF’s second quarter ended June 30, 2017 rose 1.7% to $2.36 billion.  Below is the breakdown of their revenue and operating profit by segment. 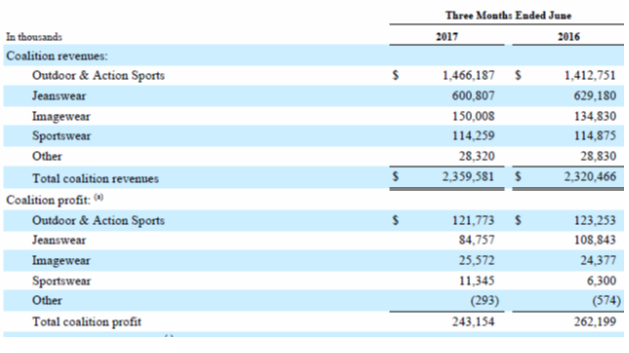 You can see the continued dominance of Outdoor & Action Sports.  “Our big three brands, Vans, The North Face and Timberland, grew at a combined rate of 7%. Our international business grew 6%, including 18% growth in China. Direct-to-consumer grew 14% and our digital business was up more than 35% and growth accelerated to 8% in Workwear.”  They owned 1,510 stores at the end of the quarter.

Revenue of all brands outside of Outdoor & Action Sports fell slightly from $908 to $893 million.

Vans “Global revenue was up 9% with 7% growth in the Americas, 5% growth in Europe, and 29% growth in Asia. From a channel perspective, D2C increased more than 25% with 45% growth in our digital business. As expected, wholesale declined at a low single-digit rate.”  The North Face was up 5% during the quarter and Timberland, 2%.

I wondered what happens when Vans inevitably, because all brands do, hits a rough patch?  How long do they expect to keep getting 29% growth in Asia for their overall business? They note that, “…our U.S business continues to be impacted by inventory destocking related to the strategic repositioning of a key customer and channel consolidation.”  They aren’t the only ones.

The gross profit margin rose from 48.9% to 49.7%.  The 0.8% increase was the result of “…pricing, lower product costs and a mix-shift to higher margin businesses.” Currency fluctuations cost them 0.8%.

SG&A expenses were up 6.8% from $941 million to $1.005 billion.  As a percentage of revenue they rose from 40.5% to 42.6%.  “The increases in both periods were primarily due to higher investments in our key growth priorities include direct-to-consumer, product innovation, demand creation and technology.”

In last year’s quarter, there was an after-tax loss from discontinued operations of $85.5 million.  In this year’s quarter, that loss was only $5 million.  Net income rose from $51 to $110 million, but the decline in the loss from discontinued operations more than explains that.  VF continues to be interested in acquisitions.  They characterize themselves as very disciplined about the price they will pay and note in the conference call that prices, while still high, have declined.

Conclusion and a Minor Rant

As I finally get towards the end here, let me quote Steve talking about stock buy backs.

“EPS was $0.29 in the quarter at the high-end of the range we guided to in April. We also repurchased an incremental $200 million of stock which when combined with our strong dividend brings our anticipated total cash returns to shareholders in 2017 to more than $1.8 billion. Strengthening total shareholder return remains a top priority.”

He seems so proud of that.  It is, of course, a common practice these days.  And no wonder- with low interest rates it’s easier and less risky to improve your earnings per share by buying back stock than by growing your business.  VF borrowed 850 million Euros in the third quarter of 2016 at a fixed interest rate of 0.625%.  Basically, he’s saying that conditions are such that buying back shares is the best thing we could figure out to do with capital.

And maybe he’s right.  But while their balance sheet is still pretty strong, I noted above the increase in the debt to total capital ratio and the decline in stockholder equity.

You know I’m a big proponent of strong balance sheets.  When the next recession comes (it will- it always does- though I can’t say when), the trouble it engenders is going to help get us through our over retailed problems.  The opportunities to deploy capital for the strong companies who will still be standing are going to be significant- maybe once in a lifetime.  I wonder if companies who are buying their shares now to manage quarterly results won’t be sorry they didn’t keep their powder dry.

VF is taking the defensive and restructuring measures that all companies need to take today and turning them into competitive advantages.  It’s easier if you’re big and have a solid balance sheet and cash flow.  Look for companies doing the same thing.

[contact-form-7 404 "Not Found"]
One More Comment on Trade Shows, A Perspective On the “Outdoor” Industry,...To Have or Not to Have Stores; That is the Question. Deckers’ June 30 Qu...
Scroll to top