VF released its earnings and held the quarterly conference call yesterday at 8:30 Eastern time. I’m not quite dedicated enough to listen to it at 5:30 AM on the West coast, but I did listen to the replay later in the morning. You can see the press release here. Remember, we don’t have the SEC filing on the quarter yet, so though the numbers are the same as what you’ll see in the 10Q, we do get management’s spin on things- their “happy dance,” as I like to call it.

There’s no doubt VF had a good quarter.  For the quarter ended September 30, revenues were up 7% to a record $2.2 billion and gross margin at 46.5% was the highest ever. Net income for the quarter was up 11.4% to $243 million. For nine months, sales have risen 5.1% to $5.576 billion and net income is up 31% to $517 million. They accomplished this while increasing marketing, administrative and general expenses in both the quarter and the nine months compared to the same periods the prior year. The balance sheet is very strong with $403 million at the end of the quarter. They’ve got no real financial limitations in carrying out their strategy.
You may recall that VF divides their business into six segments they call coalitions; outdoor and action sports, jeanswear, imagewear, sportswear, contemporary brands, and other. The table below, taken from the press release, shows sales and  what I think are operating profits for each segment, though they just call it profit. As you can imagine, they were almost giddy with the 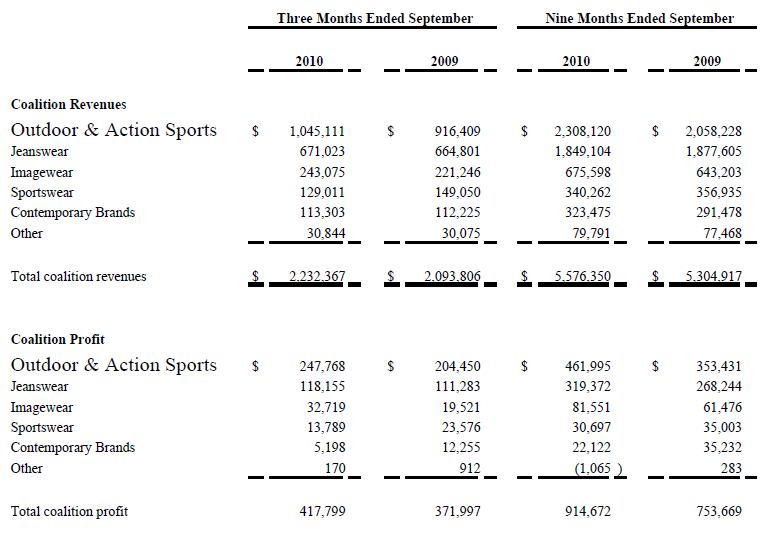 results and opportunities they see in outdoor and action sports.   They said that revenues for the North Face and Vans rose in the quarter by 17% and 19% respectively. The whole coalition rose 14%. The coalition’s growth for nine months was 12%. For the quarter, the outdoor and action sports coalition generated 59.3% of total coalition profits and 46.9% of sales. For nine months, the numbers are 50.5% of profits and 41.4% of sales.
You can understand the focus on outdoor and action sports. The other coalitions didn’t perform as well and aren’t as large. Jeanswear is actually down for nine months and up only slightly in the quarter. That was impacted by VF exiting the jeans mass market segment in Europe. Imagewear revenues are up 10% for the quarter but just 5% for the year. Its profit, however, increased pretty dramatically as you can see.
Sportswear revenues were down for both periods and profits fell rather precipitously, especially in the quarter. This is explained partly by some Nautica shipments being moved from the third to fourth quarter.   Contemporary brand revenues were up 11% for nine months, but pretty much level for the quarter. But profits in that segment fell hard in both time frames.
You can see why they spent so much time on outdoor and action sports. It’s the biggest chunk of their business, it’s performing well, they see lots of opportunity, and the news in some of their other segments isn’t as good.
Implications for the Action Sports Market
What I really found interesting- more than the financial statements- were a handful of observations made about their business. Those included:
I slept on this to see if an eloquent way to tie all this together would explode fully formed into my brain. It didn’t, so I guess I’ll just start writing. The North Face as a snowsports brand just sort of stopped me in my tracks. Can any brand that makes anything to be in cold weather become a snowsports brand if they have enough resources to establish the marketing position? If you’re a snowsports brand, are you an action sports brand?
Just what is the action sports market these days anyway? I don’t think the action sports market grows just because VF (or Nike, or Billabong, or Burton, or Quiksilver, etc.) sells one more piece of stuff to one more person who’s never been near a skateboard, snowboard, or surfboard. I know that there’s still a meaningful connection between some people who don’t participate and the “core” market of those who do, but as you get further and further from that connection and deeper and deeper into the distribution can you still talk about being an action sports brand in a meaningful way?  That is, in a way that helps you run your business.
Growth in the action sports market is related to growth in participation, and I don’t think we’re seeing much of that right now. As a brand, it’s dangerous to believe yourself an action sports brand once you move beyond the participants and its relatively immediate environment because you just won’t have the customer connection you think you have.
VF, of course, doesn’t see itself as an action sports brand, but as a portfolio of brands some of which are in action sports. Maybe they’ve got the resources and management to make The North Face into a snowsports brand (Please, no North Face snowboards).   That won’t make it an action sports brand, but it will contribute to the confusion (at least to my confusion) about what this market is and is becoming.
Meanwhile, they’ve got 779 retail stores and counting. And speaking of confusion, which brands will they carry in their stores? Just their own or brands they don’t own as well? Will the brands they carry but don’t own want to be in those stores? Can they afford the possible sales decline that will occur if they aren’t in those VF (or Billabong, or Nike, or Quik) owned stores? Do more brands have to open more retail stores as a strictly defensive move to preserve their sales volume?
And this is all going on while cotton costs are going to lead to some inevitable price increases and no growth in gross margins while consumers are cautious about their spending. This is happening to VF (and others, we already know) even with their sophisticated systems, supply network, and negotiating power. How will it impact smaller companies?
Those of you who have been around a while remember when it was clear what was and was not the action sports business. You knew who your customers and potential customers were. My suggestion, if you really are and want to be in the action sports business, is that you go back to that.   I’m not saying don’t grow. But don’t delude yourself into believing that the real action sports market and your target market is $10 billion or $20 billion or whatever the apparel/fashion/lifestyle market is. That is not the action sports market no matter how many big companies with their very own retail chains say it is.

Dance around the 800 pound gorillas. Not with them.