Well, as you know, A&F is having some troubles. You may recall that they fired their long time CEO late last year and have retained seven new board of director members and two new brand presidents, all with significant retail experience. They are in the process of finding a new CEO. If you want to refresh your memory as to what got them to that point, here’s a link through my web site that tells the whole story.

The good news, I suppose, is that A&F is still profitable and has a balance sheet that supports their change efforts, unlike some other companies I’ve written about. Let’s take a look at just what their challenge is and then review the numbers.

Directly from the 10K (which you can see here) are their descriptions of their three brands.

“Abercrombie & Fitch. Abercrombie & Fitch stands for effortless American style. Since 1892, the brand has been known for its attention to detail with designs that embody simplicity and casual luxury. Rooted in a heritage of quality craftsmanship, Abercrombie & Fitch continues to bring its customers iconic, modern classics with an aspirational look, feel, and attitude.”

I’ll leave it to you to decide if those are reasonable brand positioning statements in our current market for a large public retailer. Hollister, as you’ll see below, is their largest brand. Their Hollister positioning statement sounds a bit like PacSun’s “Golden State of Mind” concept, but the brand is way more surf specific.

Their discussion about problems selling their logoed product might suggest there are some issues with positioning. “Reduced logo business,” they note in the conference call, “continues to weigh heavily on our results contributing approximately 12 percentage points to our down 10 comp for quarter, with non-logo business comping up slightly.” There’s also some talk about selling their brands at wholesale rather than just through their own stores.

Speaking of their stores, here’s a breakdown of how many of which brand they have where.

Their store numbers have trended down from 1,069 at the end of fiscal 2010. They closed 51 U.S. stores during the most recent year (excluding Gilly Hicks, which they are eliminating completely). That’s around 275 U.S. stores closed since 2010 (there have also been some openings) and they “…expect to maintain this rate of closures and have nearly 70% of our U.S. leases expiring over the next three years.” The least expirations will make closing costs lower.

Their long term objectives are similar to every other retailer and are to improve store productivity and profitability, have some international growth, increase direct to consumer and omnichannel penetration and reduce expenses.

Nothing bad there, but also nothing particularly differentiating. It says something about the retail environment that all retailers seem to be trying to do mostly the same things.

A&F’s direct to consumer operations (by which I think they mean online sales) were 22% of total revenues. But in describing their omnichannel efforts, say they are “…working toward providing customers with a more integrated and convenient shopping experience both online and in-store , including enabling ship-from-store and order-in store.” They also note that they are “…in the process of evolving its consumer engagement strategy, going beyond its iconic in-store experiences to further develop digital experiences.”

It sounds like they think they are a bit behind in this area. Interesting, when they have 22% of their revenue from online.

Results for the Year and Quarter

For the year, total sales fell 9.1% from $4.117 to $3.744 billion. U.S. store sales were down 13% to $1.879 billion. International store sales fell 12% to $1.033 billion. Online revenues rose 7% to $832 million. Unused gift card revenues were $5.8 million.  Below is the chart that lays out the sales results for the last three complete years. You can see that all three brands have declined for the last couple of years. The overall decline in comparable sales was 8%, including a $19.2 million negative exchange rate impact. Hollister was down 10%. 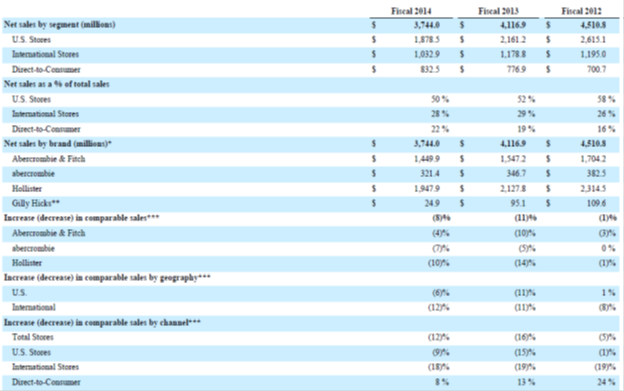 The gross profit margin fell from 62.6% to 61.8%. “The decrease in the gross profit rate was primarily driven by increased promotional activity, including shipping promotions in the direct-to-consumer business, partially offset by lower average unit cost.”

In the 10K and in an investors presentation they referenced during the conference call, they present their results excluding these expenses arguing, as so many companies do so often, that excluding them allows you to better see the results from ongoing operations. As regular readers know, I’m cautious about that approach. Especially in this case, when they have already told us they are going to be closing similar numbers of stores for the next couple of years and, I assume, generate more of these expenses, it’s hard for me to see the justification for excluding them.

Marketing, General and Administrative Expense fell 4.8% from $481.8 to $458.8 billion. They want us to know that these included “…$16.4 million of charges for Fiscal 2014 and $12.7 million of charges for Fiscal 2013 related to the Company’s profit improvement initiative.” Then they tell you what the expenses would have been without those costs, because they’d kind of like you to not think of them as part of the operation even though they are critical in getting the operation to work better.

Finally, there are asset impairment charges of $45 million in 2014 “…related to 51 stores whose asset carrying values were determined to not be recoverable and exceeded fair value.”

The total of these charges are $78 million for the year. The asset impairment charges and some of the other are noncash items, but that’s still a big number to ignore. And as they put it themselves on page 24 of the 10K, “These non-GAAP financial measures should not be used as alternatives to operating income, net income or net income per diluted share and are also not intended to be indicators of the ongoing operating performance of the Company or to supersede or replace the Company’s GAAP financial measures [bold added by me].”

As a narrative of what happened it’s reasonable to point out these expenses and write downs.   It is not reasonable to ignore them in evaluating financial results. The only reason you can possibly be a bit sanguine about them is because of the strength of the balance sheet. Equity has fallen from $1.7 to $1.4 billion, but there’s $570 million in cash and a current ratio 2.4 times. Inventory was down 13% consistent with the sales decline. However, long term debt rose from $120 to $291 million over the year with a resulting increase in interest expense from $7.5 to $14.4 million. They had to pay higher interest rates in the year just ended than in the previous year.

When a respected, long time CEO losses his way, things often have to get pretty difficult before he can be “resigned.” That’s what happened at A&F. They are only beginning a turnaround. Though since this is a company that’s making a profit, perhaps repositioning is a better term. They are changing management, rationalizing their store base, reducing expenses, and working to “evolve” the merchandise selection and in store experience and they are “…investing in our successful DTC and omni-channel initiatives.”

I have the sense that they are a bit behind the curve in terms of the omnichannel and continued to rely too long on the power of their brands as they perceived them when they should have been focusing on what their customers wanted. They seem to have figured that out and are moving to correct it.

If their problem with logoed product is some combination of it being too big, poorly designed, or in the wrong place, that can be managed. But if it’s that their customers don’t want their logo at all, it’s a bit of a bigger issue.

[contact-form-7 404 "Not Found"]
PacSun’s Results for the Year; The Good and the BadWhat’s It Like Out There in the Real Skateboarding World?
Scroll to top